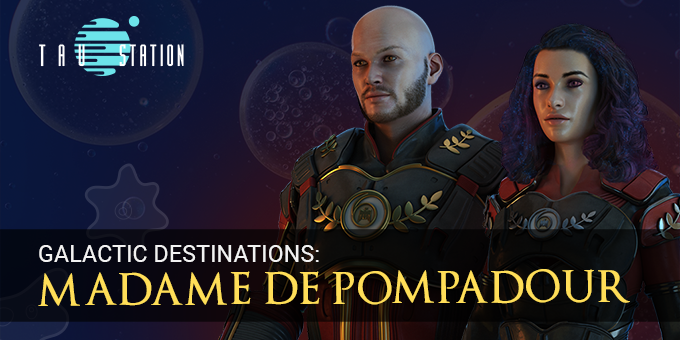 With the opening of the jump gate to Ross 154, we’re able to continue bringing you information on some of the intriguing new locales you can find within this scarlet tinged star system. This segment, Galactic Destinations brings you to the charming and picturesque Madame de Pompadour!

Madame de Pompadour is a Gaulish station situated atop a massive asteroid, with most structures housed within a large crater. The crater is covered by a hemispherical ‘lid’ which maintains the atmosphere within. Initially, holograms were projected onto the entirety of the inside of the ceiling, giving the impression that residents were looking straight up at the sky above. This, however, was quickly found to induce panic attacks, not the least of which were often suffered by newcomers to the station. The holograms were thus scaled back to specific segments, giving the impression of gigantic windows allowing the red sunlight of the system’s star to filter in.

While it is very large for an asteroid, its gravity is still quite low, despite technology’s best efforts, and there are many contingencies for this, from the way food and drink are treated, to the infrastructure within the station. While some structures can be found on the surface of the asteroid such as solar panels and various automated systems, most things are kept within the station crater, which is roughly 47 kilometres in diameter.

The station is the only Gaule presence in the system, and thus their fleet is quite advanced with a hefty military presence. It used to be the only Gaule station amidst three Consortium ones and thus endeavored to represent the very best of the Gaule Protectorate, as well as maintain the small foothold into a system which the Gaule did not want to lose.

The station’s supply of water used to be held in containers around the inner rim of the crater until the Catastrophe resulted in the release of all the security valves and safety mechanisms at once. This led to the station flooding, which, given the low gravity, made for some challenging situations until the water settled. After a day, the station had managed to salvage the situation with only a handful of casualties. However, less than a tenspan later, a large percentage of the population succumbed to a water-borne parasitic amoeba, which many had inhaled during the low-gravity flood.

After a thorough purification of the waters, the survivors made the most of the tragedy and tried to turn their previous crater-bound home into a beautiful canal-filled station. There are still echoes of fear around the lethal amoeba, and whether it could possibly have survived. Because of this, it is forbidden to swim in the waters, even though they’ve been thoroughly decontaminated.

The station itself sits on the (now water-filled) crater. While there is abundant water in nearby asteroids, which are often mined as ice, the station does not have enough other resources to care for much flora or fauna. Rather, artists have created holo-models of trees and flowers.

People sometimes travel on gondolas, as a tourist activity, but there are high-speed trains installed around the crater to help people and shipments cross larger distances.

Finally, this is a station of passionate people. Since the system is so varied, leaders aim to showcase the best of the Gaule Protectorate, and motivate people to excel in all aspects. After their mandatory military training, many people serve further cycles, even if they later go on to do other things. In this system, without much inter-factional hostilities, being part of the military is less dangerous, and usually amounts to a show of bravado and kicking off the odd Freebooter ship more than anything else.

As part of turning the station into a beautiful place post-Catastrophe, artists and architects have had a strong hand in modifying the interior, paid for by wealthy Gaulish patrons (who sometimes vacation here) and the Gaule government’s own art fund. Depictions of flora and fauna abound, to give the impression of the station being full of life. The architecture has been altered from its original Spartan look, to a detailed Rococo style, and music can be heard coming from the many tea houses, as well as spoken poetry.

The Catastrophe, it seems, served as a warning and chance to grow, but also affects people to this day. Poets and singers often mention the amoeba, but not by name – only as “mangeur de cerveau.” This leads to people who don’t know Pompadour’s history to misinterpret poems and songs. Rather, they often believe it is a metaphorical brain-eater, like the Mesh, or some kind of fabled creature used to scare children.