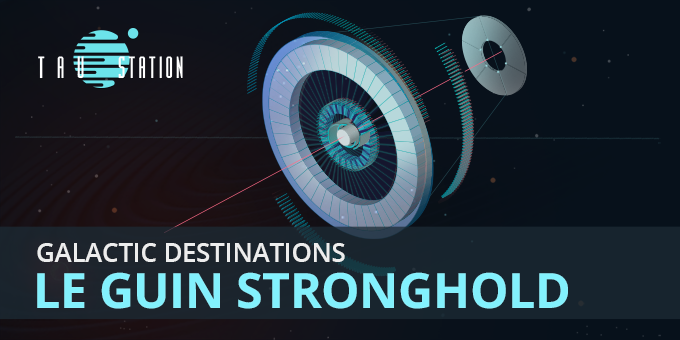 Last but not least in our Galactic Destinations: Ross 154 series, is the enigmatic Le Guin Stronghold. Once Consortium, now charmingly Independent, this Station maintains a quirky, chirpy defiance in regards to returning to the fold. Take a segment to learn about a station that looks as different as its locals sound.

LeGuin was once a Consortium civilian station, a small man-made Stanford Torus style facility in the Ross 154 system. It was meant to be a self-sufficient colony, recycling nearly 100% of its waste and sending automated bots to mine for water or metals from nearby asteroids when needed. While Ross 154’s light is weak, the station is close enough to the star to meet its power needs.

The station was originally billed as a small town ‘where everyone knows your name’. It was the first of what were meant to be many small stations circling Ross 154, focused on comfortable civilian life.

Not long after it was established and populated, the Catastrophe struck. As everywhere, the results were devastating. Many were lost, and the few who were not, barely survived.

After a tense few cycles spent clearing corpses and waiting for communications, the people decided to continue living their small lives as best as they could.

By the time the Consortium finally reached out to the station they had already spent time dismantling and redesigning cultural and hierarchical systems, and formally declared themselves Independent. The Consortium, presumably, could easily have taken the station back by force, given how few people lived here, but it would have been a terrible PR move. The media picked up on this lost station of peace-loving, strangely-communicating people who wouldn’t relent their claim to LeGuin. The House of Syria, their tech loving neighbors, helped push this narrative as far as Tau Station, at which point the Consortium decided to win over the people of LeGuin Stronghold with friendship instead.

Many features of this station derive from the Torus’ ring shape. Travelers can arrive in the central hub, located in the middle disk which doesn’t rotate. From there they can take a high-speed shuttle through the spokes into the rotating ring itself. Due to its proximity to the dim Ross 154 and sets of mirrors that reflect sunlight in the right direction, the station is often bathed in natural (albeit red) light.

As a small man-made station, LeGuin’s gravity is somewhat weak, and there are areas (such as its connecting spokes and central hub) which have no gravity. The rotation of the ring itself may also cause initial discomfort to travelers, especially as they change from spokes to ring, but it’s easy enough to get used to.

Another interesting idiosyncrasy we have noted is that language and communication have evolved in a rather unique way here. A particular shift in speech patterns, brought about by a need to wear masks during the Catastrophe,  incorporates  what appears to be a dialect designed for more emotional openness and semantic transparency of intent. Phrases are often prefixed with an emotion or descriptive word that readies the listener for a sentence they are about to hear. The sentence itself tends to be completely in the form of metaphor!