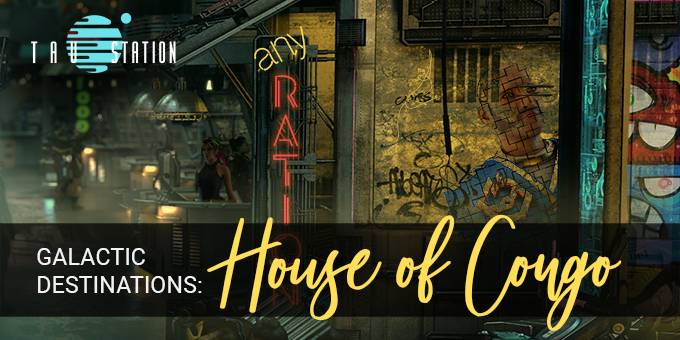 Last tenspan we gave you an introduction to Sirius, but what does each station have to offer? Let’s start by zooming into Sirius’ self-proclaimed “most welcoming station”, House of Congo! Many of the locals consider it their real home, having escaped the Consortium’s Orwellian eye or Gaule’s militaristic tendencies to live somewhere they can truly be themselves. But what does that mean for the people who reside here? Let’s find out!

Freebooters love their independence, and House of Congo is no exception. The first thing travellers might notice is that every building, house, or stall follows its own rules: Want to paint rainbow lizards on your facade? Make a mockery of the Consortium’s leaders with graffiti caricatures? Make a makeshift tent out of mirrors and tape? Nothing is out of bounds! In fact, there are rumors that their cloning facilities are the most breathtaking in the universe, though I did not manage to secure a tour in my short time there.

But freedom also comes in other forms. While House of Congo’s blue-green algae farms aren’t enough for self-sufficiency, its lucrative digital dealings – legal or otherwise! – help it secure imported rations and even delicacies from time to time. And while Freebooters don’t observe government rule, there is enough respect for each other’s freedom that violence doesn’t break out too often. So they claim, though I did witness a spat or two while I was visiting their markets!

Caracal in House of Congo 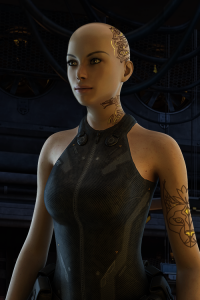 In House of Congo, one creature in particular has come to symbolise freedom – cats! Apparently the first freebooter vessel to arrive in House of Congo after the Catastrophe was called the Caracal, and its hacker crew is responsible for getting many life-saving systems back up and running. The Caracal, which I’m told is a type of Earth feline, can be found everywhere – depicted in tattoos and banners, used in song lyrics and Mesh nicknames!

Now, while this might sound exciting for the free-spirited among you, let’s not forget what being a Freebooter station means – you have to watch out for yourselves. Food is mostly imported, so stocks tend to fluctuate, and every digital dealing could be a potential swindle. Pack some extra rations – the algae supplements are not as filling as you’d think – and remember to keep your CORETECHS security up-to-date!

Finally, make sure you have a clone ready. Being in Sirius, a system the Freebooters might destroy just to spite the Consortium and Gaule, is risky!