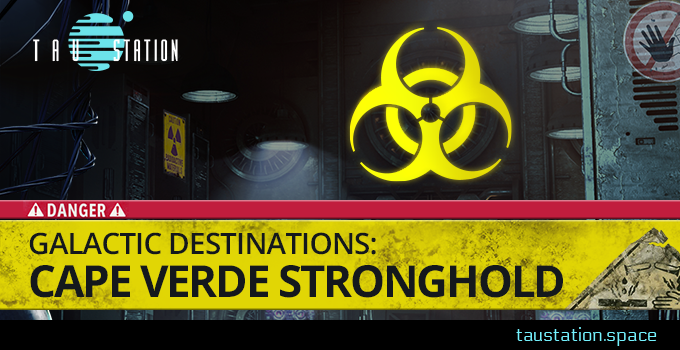 Wherever humanity goes in this strange and wondrous galaxy, dear reader, Galactic Destinations goes too. But not always: not to Cape Verde Stronghold, in the so-called ‘Iron Quad’ system. On this occasion, our writer refused the trip and advises you do the same. But, for the fearless travelers who visit regardless, here are some essential survival tips:

Want to share a station with thousands of deadly pathogens and chemical compounds? Probably not, but that’s exactly what happens when you visit Cape Verde. Because everyone knows what this place is REALLY for: the Consortium’s chemical and biological weapons program.

And don’t let a few chunky-looking doors lull you into a false sense of security! This place had a 100% Catastrophe mortality rate within – wait for it: one segment. Yes, you read that right. When things go wrong here, they really go wrong. So you may want to pack a hazmat suit. Maybe a gas mask and some spare filters too…

Now, understandably, all those pathogen labs make people a little edgy here; so there’s a lot of safety regulation.  But it’s not always easy for visitors to keep up with what’s allowed and what isn’t. The Brig’s proof of that, often housing at least a few bemused recent arrivals who’ve fallen foul of some unknown safety protocol or other. Leniency isn’t in the vocabulary here.

So, if in doubt, don’t touch anything! Don’t wander down mysterious corridors or open strange-looking doors. Don’t visit the old chemical stores in the Ruins. Steer clear of the area known as ‘The Testing Rooms’. That’s where human ingenuity, chemistry and biology combine to create some pretty scary stuff! Suppress every inquisitive impulse before it lands you in trouble. And, if all else fails, keep a few bonds spare in case you need to bribe your way out of a lengthy sentence.

Get used to Gaule paranoia

We all know the Protectorate wasn’t pleased by the Consortium’s reopening of Cape Verde. Officially, Verde’s business is defense, but the Gaule have their doubts. So it’s no surprise that Protectorate war games often center on the Iron Quad. You don’t want to be on Verde if this cold war ever heats up!

Thankfully, the Nouveau Limoges Accords keep things chilled by granting Gaule inspectors access to Verde’s labs. So alongside the station’s strict Consy surveillance, you may also find yourself under the scrutiny of the Protectorate’s keen-eyed inspectors. We hope you like answering officials’ questions!

Keep these tips in mind, intrepid reader, and your visit will no doubt be a success. But don’t expect to bump into a Galactic Destinations correspondent while you’re there; we’re keeping a safe distance!