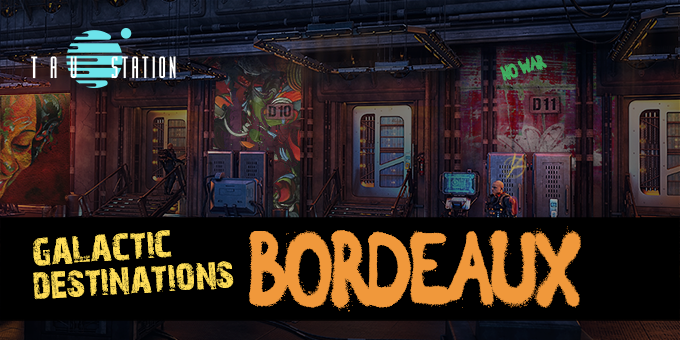 “All animals are equal, but some animals are more equal than others.” Ancient Terran Text

This tenspan, Galactic Destinations brings you to Bordeaux Station, a culture and society with a uniquely colorful recent history, and potentially an explosive future! We interviewed a local historian to get the inside scoop!

Bordeaux is very much a society born of a series of events perpetuated by its reaction to the Catastrophe. Here, the military, for some reason almost in its entirety, blasted off the station to apparently chase after some unseen assailants. They did not return for some time, a long time, in fact.

A coalition government was formed, born of like minded citizens without any particular status or class. Under this people’s ruling body, the station survived and even prospered to a degree. Food was rationed, repairs were organised, and artistic endeavors and activities were organised on a tenspanly basis to facilitate a healthy expression against the uncertainty of those darker times.

A community of artists, poets, dancers began to form, born from the ashes of a time when the Black outside truly was empty. Thus they looked within, instead. Created stories, composed ballads, painted landscapes to provide an escape from the harsh reality while they waited, and hoped that the outside galaxy would return.

And then it did. The military returned in ‘glory,’ announcing that the citizens were safe once again. The coalition government stepped down, the Protectorate placed its high ranking generals and colonels in positions of power to rule and maintain the peace. Curfews, legislation, and various other controls were quickly established to keep citizens happy and productive and the dancers and poets retreated into the shadows.

Rumors speak of poems now growing in anger, in volume, of new stories weaving tales of oppression and retribution, and of ballads singing hymns of revolution.  Whether true or not, through this time, the ruling military classes maintain that hardship is simply necessary for the citizens for the good of everyone, though they do so from opulent offices while eating imported foods and drink.

Anonymous historian and citizen of Bordeaux

“…and to know that things never had been, nor ever could be much better or much worse–hunger, hardship, and disappointment being, so he said, the unalterable law of life.” Same Ancient Terran text