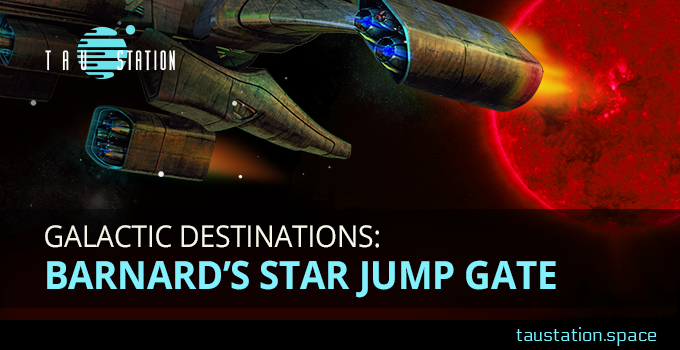 Bathed in the dim glare of its ancient star, this Consortium-run Jump Gate station welcomes visitors to Barnard’s Star. One of them is Chief Bakker, sent here to investigate the station’s curious Catastrophe experience. Below, we reveal a transcript of Bakker’s first dispatch to Consortium bosses, back on Tau.

One thing’s clear already: just starting this inquest is proof enough for some that all the rumors are true. Reports of a battle have swirled here since the Catastrophe, and now Consortium Intel is here to take a closer look. Wouldn’t do that unless some of it was true, would we? That’s how the locals see it, and I can’t fault their logic.

And boy, do they want to discuss it. Every segment I spend in the bar gets me ten new takes on it all. Everyone has their own version of events; survivors and next generation alike. Most agree there were two ships; one ours, one theirs; and a skirmish. Beyond that, pretty much nothing lines up neat. But then that’s why I’m here I guess.

I’m meeting the Station Governor, Orson Xian, later. He’s given us half a deck in the Ministry to use as offices. Not a patch on our usual Tau suites, but it’ll do. Main thing is we got quiet space to interview survivors. Plus: a decent coffee machine. Did I mention I like Governor Xian?

The rest of my team will be here in a few days. After that, it’s down to business. 32 of Consy Intel’s finest minds; all here to figure out why Blue and Red started shooting at each other here all those cycles ago. We got forensics teams, expert interrogators, two artefact specialists, military strategists, and a system historian. It’ll take time, but we’ll get something.

A few grumbled about having to follow classified protocols for the duration; slows down the work apparently. I spelled it out for them. There’s risk here, scratching at things we don’t fully understand. If we find proof of Gaule mis-deeds during Catastrophe, it should be the bosses who decide how to proceed: not some nationalist hot-heads looking for kindling to start a war. It’s simple: leak inquest data, even by accident, and you’ll be looking for a new career. They didn’t moan any more after that.

Once we’re up and running, it’ll take us near enough a cycle to collect all the survivor testimonies. After that, we’re onto physical data collection, starting with station internals and then moving to externals, including full search of passage 420.C to Sol. It’s a longshot, but if there was debris from the fight, the only bits of it that aren’t in another galaxy by now would be those trapped in the wormhole. Like I said, this is going to take time. But if it gets us closer to understanding Catastrophe, it’ll be worth it…

Anyway, that’s enough for today’s dispatch. You’ll get the pleasure of my soothing voice again tomorrow.

Oh, and one last thing: next time you offer me a career-defining case, make it somewhere fun like Cirque Centauri. You ever meet the sort of folks who choose to live on a Jump Gate before? There’s a reason normal people only spend a few days here usually.

That was the first of 1134 daily dispatches Chief Bakker would eventually send back to Sol System over the course of his inquest on Barnard’s Star Jump Gate. Today, Bakker and his team are recently-departed, along with their classified findings. But for many of the residents of Barnard’s Star Jump Gate, the search for answers continues, and they’re growing increasingly impatient…