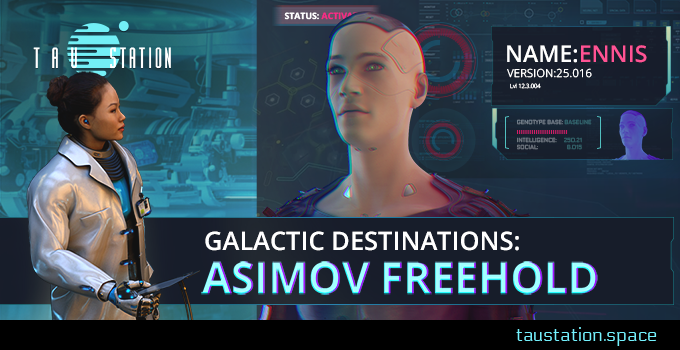 Dear reader, we hope you’re in the mood for ‘droids and bots! This latest issue comes to you from Asimov Freehold, where our writer Aung Yeoh recently interviewed one of the Consortium’s best brains on the subject; Kelly O’Denshire. Below you’ll find her intriguing dispatch from this Iron Quad oddity…

“Don’t mess this up! It’s so rare for the boffins to give interviews. And don’t fall in love with a ‘droid. Yikes. You know what you’re like…”

With my editor’s parting words still ringing in my ears, I depart for Asimov early in Cycle 202. My task? Meet one of the tech bigwigs. Find out what makes her tick. What do the white-coats do here and why?

Am I excited? You bet. Nervous? That too. You see, after six Cycles of fruitless asking, Asimov’s officials finally agreed to talk to us this time. Maybe they’re fans of ‘Galactic D’ now? More likely, they just finally accept we’re not ‘Booter thieves or Gaule spies. Either way, I intend to make the most of the opportunity.

As the shuttle begins final approach into Asimov, my guts are fluttering with anticipation. This is why I became a reporter, right?

Archaeology among the stars

In the port I meet my host, and android tech expert, Kelly O’Denshire. We  chat over tea, while Kelly explains the unique challenge of her work. “You should think of this as a kind of archaeology… We take relics of our past civilization and try to work out what they are; how they work, why they were built: all the usual stuff. Except the relics we study look humanoid and talk back to us as we examine them…”

Which brings us nicely to androids. These complex machines occupy the higher end of what pre-Catastrophe humanity achieved in the field of robotics. They possess simulated sentience and an unsettling polymer-made ‘flesh’, which is unnervingly similar to the real thing (and less prone to wrinkles!)

Kelly’s team carry out basic repairs to most android models, but the knowledge and apparatus needed to manufacture a new one is many cycles away. Not only is this a long-term project, some argue that it’s also a costly distraction from more pressing issues requiring humanity’s attention right now. Not that Kelly is deterred.

“Some of my peers went into military science; chemicals on Verde, surveillance on New York, all that stuff. They think I’m mad to spend my skills tinkering here with droids…” Kelly is thoughtful in her reflections, pausing to choose her words carefully.

“And in one sense they’re right. Shiny robots hardly saved humanity from disaster before, so they’re not exactly high priority for preventing a repeat. But I can’t help it. These machines fascinate me. Working on them forces me to ask what makes me human every single day. I never get bored of thinking about that!” Her mouth bends to the smile of a person who’s found her calling in life and is grateful for it.

As we chat, I notice Kelly’s eyes have the clear irises typical of most Harsenes. They twinkle as she talks of her life’s work, but the mood gets more sombre when Asimov’s history is raised.

Like most of her colleagues, Kelly applied for a post here shortly after the station’s long-awaited reopening, when Consortium bosses finally decided the post-Cat quarantine had lasted long enough. Kelly’s assistant, Min-Su joins us at this point, chipping in to the discussion.

“No point obsessing about it. Lotsa stations had 100% fatality rate in the Catastrophe…” Min muses, taking small sips of her coffee. “Course it feels weird, and sometimes I catch myself imagining what it was like for the first recovery teams here. But we’re all living in the Cat’s shadow, right? Some places just got more ghosts than others…”

That’s one way of putting it. On Asimov, the entirety of the station’s small, mostly research-focused, population was – for some inexplicable reason – found crushed to death in a waste compactor, having triggered it on themselves. Why did they do it? Various theories were mooted, ranging from the unlikely to the ridiculous. Kelly chimes in.

“Look. This wasn’t some weird suicide cult. Maybe the pressure went? Or the air vented? Either way, they hid in there because they thought it was the safest thing to do… They made a mistake somewhere along the line and paid the price. Is it that different from other stations?”

An uneasy silence hangs in the air for a moment as the two women drain their cups. Kelly suggests a tour of their lab.

We pass through various security doors until we reach a network of corridors, each leading to some lab or other. The signage alone is worth a visit. In the zone dedicated to locomotion, there are doors marked ‘Spherical orb robots’, ‘Hopping bots’, and ‘Dynamic balancing/Controlled Falling bots lab’.

Further on, we pass rooms devoted to the study of power sources, sensory systems, and environmental navigation. Kelly notices my surprise on the sheer scale of it all.

“You expected something a little smaller, right? Instead, you got four levels, twenty-plus labs, and that’s just the ones I’m allowed to mention… And over a hundred researchers. Not bad, huh?” She chuckles, clearly enjoying showing me around what feels like her home. “We call it the labyrinth cos it’s such a maze. Get it? LAB-yrinth? Don’t worry, not everyone gets our humor… ”

Peeking into the labs, we find men and women in white lab coats, deeply absorbed in experiments of all kinds. Some tinker with the exposed circuitry of an Android’s open chest plate. Others run tests on a simple cleaning bot, timing its performance in various conditions. All are friendly – but also clearly unused to visitors.

“Bit of a need-to-know culture round here… So they’re not super chatty” Kelly explains. “It’s not a small-talk kinda place. Don’t take it personally!”

Finally, after more exploring, the tour ends in Kelly and Min’s lab, dedicated to the study of simulated sentience. They show me their current specimen; an Android called “Ennis”, built to resemble a baseline human. It greets us on arrival with a smooth-toned welcome. I’m not exactly smitten (yet) but he is very polite. Charming even…

“We call him Enny for short” Min tells me. “It’s strange but he’s sort of a friend. I spend more time with him than anyone else!” Kelly and Min chuckle at the joke. To my surprise, Ennis joins in. “See! He gets us! How do they do that?!” Min exclaims.

After the mirth, Kelly gets technical, explaining the details of her work. Most of it focuses on demystifying the Android’s impressive cognitive software, which enables it to perform well in basic interactions with humans. “Isn’t it amazing? Imagine if we knew how to re-create that! People managed it once. And I’m sure we’ll do so again one day…”

Now, I’ve met androids before, but this is the first time I’ve really appreciated just how impressive they are. Sure, you can catch Enny out quite easily if you want to. But you can also have segments of reasonably intelligent conversation with him. Heck, some of it’s better quality than I can find in my local bar back on Taungoo.

And then, finally, after a very interesting day, it’s time to leave. On the ride home, I think about all the conspiracy theories that get attached to this place. Is the Consortium trying to weaponize this technology? Well, yes; quite possibly. The four laws of robotics only prohibit machines from harming humans. They could conceivably be used against aliens. And is the Protectorate secretly running its own military robotics labs? Again, yes, or at least maybe…

But that’s not what people like Kelly and Min get up for in the morning. They do it because studying these weird machines helps them better understand themselves. And I, for one, wish them every success in it. Their findings will be of benefit to us all!