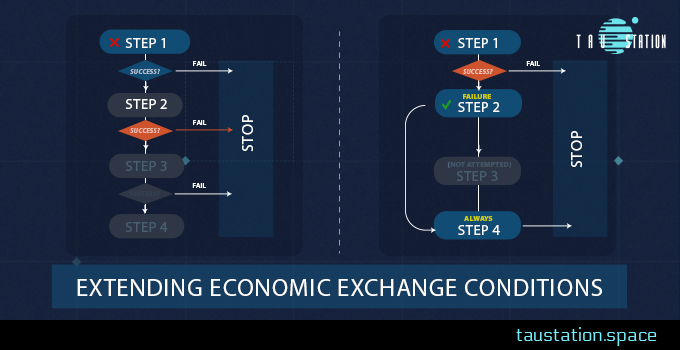 Our economic exchange system is mostly declarative and the order in which we declare exchange steps is significant to the outcome. In addition to ordering we can also mark exchange steps with “behaviors” which further modify the conditions. This example code is from “Search for salvageable goods” in the Ruins:

Ignoring behaviors for a moment we can see that the logic is basically:

As mentioned earlier, the order in which we declare steps matters. By default, if a single step fails, then all later steps are skipped. We need more flexibility which is where behaviors come in.

In order to control which steps are executed we can add further conditions which we call “behaviors”. These behaviors alter the flow of steps:

Applying these behaviors we can see that the logic is more complex:

Behaviors allows us to refine the logic within economic exchanges whilst keeping them readable and concise. Behaviors also show why ordering matters and how we can use it to our advantage.