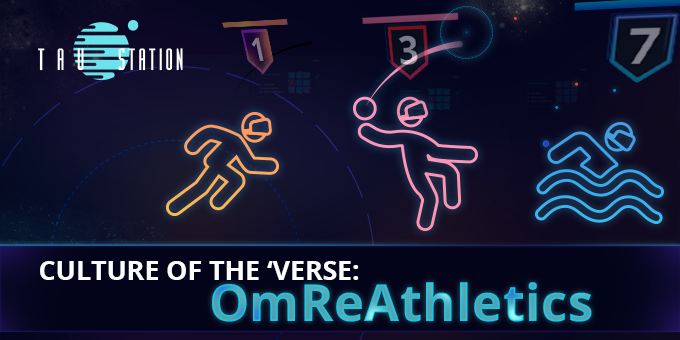 The galaxy sure is a biggun. Whole place is mindbogglingly vast, they say! And, thanks to them astro-engineering folks consistently workin’ them jump gates, it’s getting a might smaller in terms of our own perceptions. One of the greatest aspects of this here phenomenon is the reclamation and re-embracation thereof of long lost or even newfangled traditions!

OmReAthletics is one such beauty to recently come back to us from the Ross 154 system! Join us for a segment to talk up this bit of Culture of the ‘Verse!

OmReAthletics? ‘the smog is that?

Well, what we have here is an ingenious marriage of Omni Reality tech (thus your OmRe) and all sorts of hyper-fangled athletic endeavors!

Originally, OmReAthletics are a brainchild of the House of Syria. Stars, that whole place is brimming with Omni Reality enhanced visuals. Place is all drab and grey till you enable your CORETECHS to accept the incoming augmented reality matrices.

Old School vs Too Cool For

Now far as we figure, the original OmReAthletics that formed on the House of Syria involved some hefty hardware in the form of headgear, haptic suits, and the such. Now that folks from other ends of the galaxy have come a-flockin’ and enjoying the cyclical games, they done figured ways of integrating the CORETECHS into the proceedings. With CORETECHS tech spreading to the system, some of House of Syrians have taken to this as well, as it provides an upgrade to the experience.

There remains, however, a staunch group of old school supporters that maintain the true skill and experience of the sport is sullied by integrated tech. The only way to truly compete, they reckon, is using the original hardware.

Both groups are currently welcome to compete by the committee and, while friendly rivalry does exist, it don’t seem to mar the proceedings much.

There’s many tournaments throughout a cycle, ranging from team sports like omni-ball to combat games and individual skill challenges. Once every four cycles, however, the OmReTourney takes place!

Stations send reps, champions, and crowds to compete and rise to the top of the heap! Fortune and glory abound and, these cycles, a strong media spectacle is beginning to form around the entire spectacle.

OmReAthletics are fixin’ to spread throughout the galaxy now that Ross 154 is open to travelers far and wide. The military based jump gate right next door already incorporates the events in the wargame tactics and some folk even reckon there may be something a might sinister involved. Postulating conspiracy theories on the nature of secretive skill tests via the games as a way of drafting folks to Consortium military.

We hope you’ve enjoyed our segment and look forward to seeing y’all at the next games!