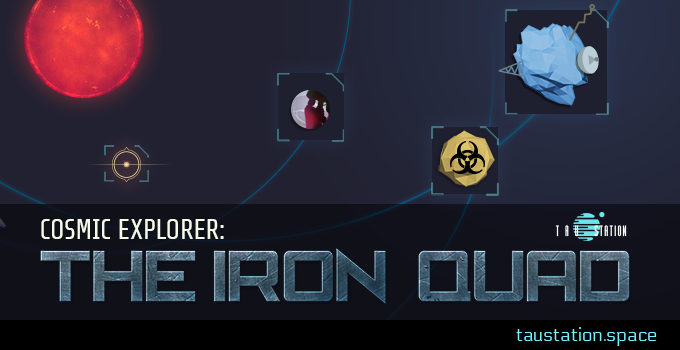 Hey there galaxy fans! Your old pal Jacqueline Valance here with the latest truths, both harsh and mellow, to shine light on the world they’re tryin’ to pull over your eyes!

It’s time to wake up and smell the war brewin’ in this corner of the galaxy. Y’all ever been to YZ Ceti? Don’t! Let me tell you right now, the Iron Quad ain’t no holiday destination!

What we’ve got here are three main stations plus the jump gate, all Consortium owned, all pretty vague in what they do. I mean, sure they disclose their ‘official capacity’ all proper like with all the bells and whistles, but what really goes on there?

Anyone tries scratching the surface and they clam up tighter than a level three plasma coil. Hells, you’re just as likely to find yourself languishing in one of their shiny brig-cells for a ten-span or three.

We got Asimov Freehold, shiny and white from the oh so genuine smiles to their gleaming sterile hallways. Robotics research they say, but should you ask for specifics, and we did, and they just flash those pearly whites and walk away. There is zero doubt in this humble reporter’s mind that they’re aiming to weaponize those walking toasters. You mark my words!

Next up, Cape Verde Stronghold. Now these fellers are less disingenuous about the exact nature of what they do and frankly, it’s terrifying! Whole place is plastered with hazard warnings and holo-posters promising a whole mess of pain and misery if you mosey into this room or that. Chemical weapons and biotech man, the station is dripping with the stuff and they’re brazen about it. They’re brewin’ up one hell of a cocktail and I don’t wanna be around for happy hour!

And finally, we got the old Spirit of New York City. Folks let me tell you, this whole place is one giant pin cushion of antennae and sensor arrays sticking out from every surface, window, and asteroid marked corner of the station. What are they lookin’ at? Hells, what are they looking for? It surely ain’t no coincidence that half the things are pointing straight down at the planetoid below.

Mark me well folks and folkettes, the Consortium has the Iron Quad wrapped tighter than a grip of well, y’know…Iron. There’s some shifty goings on there and it ain’t gonna end well. Now I may be just a humble freebooter with a pirate broadcast but you listen to old Jacqui; when the bio-waste hits the plasma coil, you just head to the nearest bar and keep your head down in a pint of something sticky and intoxicating.