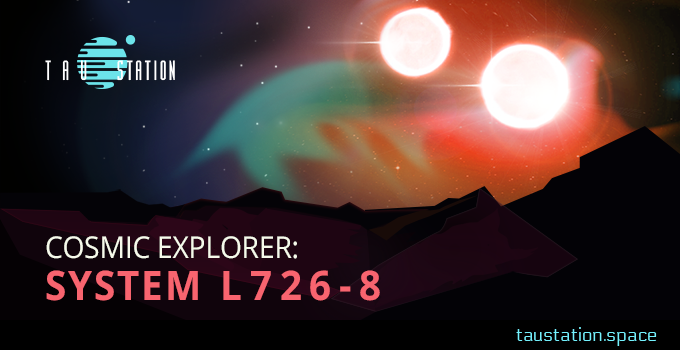 Today’s edition of Cosmic Explorer comes to you from L 726-8! This is a binary star system, home to two spectacular flare stars and the three stations originally built to study them. But that was long ago, pre-Catastrophe, when such research was still a Consortium priority. How things have changed since then!

Today, the stars’ regular flaring is still a logistical problem, disrupting travel and endangering stations. But only the Jump Gate retains its Consortium affiliation, with both other stations now independent. Below we offer short intros to each of them, written by Cosmic Explorer experts.

Despite the pressures of post-Catastrophe consolidation, the Consortium retained this Jump Gate, while auctioning off the former flare observatories of Orwell and Tianjin. But don’t let that fool you: this place is every bit as bizarre as its independent neighbors!

People here are in no doubt about Catastrophe’s cause. Ask anyone and you’ll get the same answer: aliens! The somewhat wacky ‘Roswell Division’ has a lot of members here. This cult’s central belief is simple: one day, Catastrophe’s alien perpetrators will return to finish the job. Only Roswell members will be spared. Eek!

Readers tread carefully! Tianjin is one of the galaxy’s strangest stations. Acquired post-Catastrophe by former VR entertainment mogul, Etheel Hayes; this is now a surreal theme park. Wealthy Patrons visit knowing they can indulge every imaginable desire in Tianjin’s ‘Carnival’.

The Carnival goes even further than Hayes’s earlier VR projects. Immersion is boosted by using real-life human participants for the Patrons’ ‘play’. These so-called ‘Actors’ and ‘Dummies’ waive their usual protections for payment, with a clone back-up their only safety net.

Disturbed by the idea? Then you’re not alone. Both Prometheans and many clone innovators oppose the way Tianjin turns human bodies into playthings, aided by clone tech. But, as long as it’s profitable, Hayes doesn’t seem to care too much about public opinion!

Travel tip: The Carnival offers Patrons limitless freedoms, but non-participants should be careful. Penalties for interference are severe.

Benevolent Dynamics secured Orwell Stronghold post Catastrophe and now use it as one of their key facilities. This place does weird science like nowhere else in the galaxy!

Although secretive about their classified projects, Benevolent Dynamics are always keen to advance humanity’s passion for science. If you’re polite about it, you may get to see some pretty cool stuff. Tech types won’t be bored here!

Travel tip: Respect for the word ‘classified’ will go a long way on Orwell Stronghold.