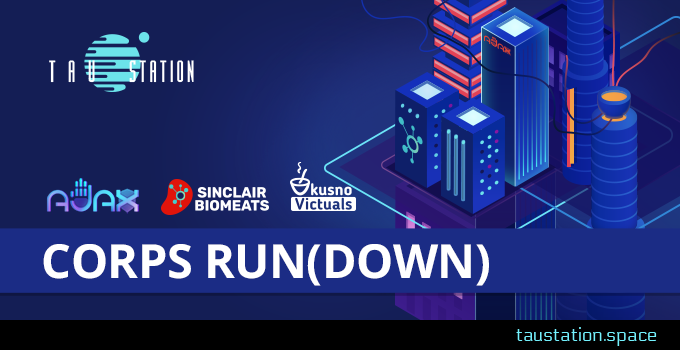 A number of corporations have risen to a degree of notoriety and acclaim since the Catastrophe, growing and stepping in to fill the void in needs and services created by the Catastrophe. Some are, perhaps inevitably, less reputable than others while others purport to having only humanity’s best interests at heart. In either case or anywhere in between, the current climate that puts survival of the species at the forefront of our list of priorities makes the perfect breeding ground for a handful of powerful organizations to end up with corporate control of various aspects of what is shaping into day to day life.

Read on below and in future segments for our rundown of the major players out there!

Originally funded by the Gaule Protectorate, Ajax Arms and Armors has since come into its own and far outgrown any requirements for government funding (though they do still maintain a fairly lucrative contract of exclusivity with the Gaule). With a penchant for crafting highly effective weaponry that deal death in a manner of creative methods, Ajax has, in the cycles following the Catastrophe, grown quite popular indeed.

Historically, Ajax was a mercenary group that was paid handsomely to undertake certain black ops missions that governments or corporations did not necessarily want to be associated with. Their line of work being particularly high risk, the group tended to use the bulk of their profits to pay in house engineers to craft and maintain their gear to the highest of standards.

Before long, the quality and performance of both their offensive as well as defensive gear began to become the subject of much praise among various organizations and thus, one day, they received a request for equipment rather than manpower. Recognizing the opportunity this afforded, both in terms of credits but as well as a much safer route of business, Ajax Arms and Armors was soon born.

The Sinclair family was one of the first groups to jump onto the organic 3D printing game after Moemedi Medical started churning out medical supplies after the Catastrophe. Siobhan Sinclair, the matriarch of this old family that predated the catastrophe, spent what little remained of her clan’s fortunes buying an old 3d printing machine off Moemedi and transporting it to her home station of Ghost of Mali. There, she had a team of engineers and biologists working tirelessly to produce a viable cocktail of nutrients they could use as a base fuel for organic food replacements. Their dogma was that it didn’t have to taste good, only keep people alive.

On 34.59 an accord was reached with Moisson Station, they chose various molds and fungi as their base ingredient and began churning out all manner of edibles to send to every station for a modest fee. As the business began to boom, so did the product. Now, various artificial tastes can also be added to the production after the fact. It’s still mycelial, but it can be printed and artificially treated to look and taste with whatever one desires (to a certain degree of success).

The Catastrophe affected everyone; in most cases, the effect was death. Those few who managed to survive scraped by in any number of ways. Some resorted to cannibalism, others to creative ways of farming mold, others just fared luckier. In the case of Vladimir Fitzhenry’s great grandfather, it was promotion, gastronomic skill, and a stranded ship with a fully stocked larder. Vassili was just a chef on the intergalactic cruise liner Diomedes with a ship’s complement of well over a hundred individuals, both guest and crew. The Catastrophe assaulted the ship’s systems, infected critical networks and causing deadly chaos throughout the vessel.  After the crew was able to restore some semblance of order, it transpired that Vassili was the highest-ranking surviving member of staff.

The Diomedes was dead in the water, so to speak, and the highest ranking officer was a chef. With no way to get the engines any power and barely any life support, he did what he knew best, he fed people. For seven cycles the Diomedes drifted through space, and while its primary function meant it had an extensive storage of vacuum sealed foods and even a fairly efficient water reclamation system built in, its larder grew emptier and emptier. Vassili was a world-class chef and it is said that even when the food was whittled down to the barest of rations, he somehow always managed to mold it into what appeared to be a king’s feast.

Vassili died some cycles before rescue came, but he passed on his knowledge to his daughter. When the Diomedes finally made contact with rescue vessels of the Gaule Protectorate, she brought her father’s skills to what remained of humanity when she set up shop on Bordeaux Station. There she trained dozens of cooks, including her son Vladimir who now runs the family business. Now, anyone who could provide them materials and credits would find the heartiest possible meal crafted.

So, many thanks for joining us for this segment of Corps Run(down) folks! We’ll be bringing you more history and current news on the big, bad, and occasionally benevolent corporations that seem so fundamental to the way of things today. Stay tuned for the next segment.