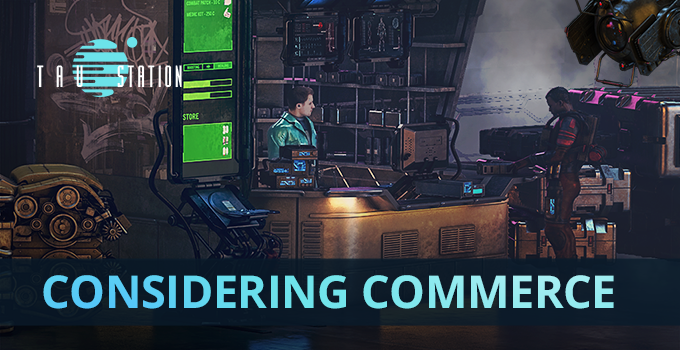 In the cycles that followed the Catastrophe, it took every ounce of tenacity, ingenuity, and no small degree of luck for humanity to drag itself, tooth and nail, out of the debris filled avalanche of potential oblivion. Always scrappy as a species, we somehow managed to pull ourselves, gasping for collective air inexorably upwards, grasping at every chance for survival. Along the way, a number of principles from Before managed to cling onto us for the climb out of this metaphorical pit.

Capitalism, ever our most tenacious trait, was one such survivor. It has since born a number of systems that have helped us try to thrive in an otherwise untenable situation. In today’s future, the concept of Free Enterprise allows us to boldly go where we might otherwise have been wholly unable to. Engage with us below and we shall go into a little more detail.

Food, water, and air were among the first elements of life we needed to scavenge for through the rubble of our former homes. Without these, as was very often the case during the first, dark cycles following the Catastrophe, there was only death. Very soon after the need for protection quickly arose, we started scavenging for anything that we could fashion into a weapon to protect what nourishment we could find. Those first cycles were often violent and bloody. If you found food or water, you could be sure that others would want it, need it.

As we scavenged, we discovered something new, whilst also very old. We discovered the digital presence of credits and bonds saturating much of everything from Before. Suddenly we had a potential substitute to the violence, or at least, to a certain extent. Many prefer to simply take even this currency that others use for trade, by force as well.

At the same time, the Consortium and the Gaule Protectorate were moving slowly through the systems, reinstalling the foundations for order and law, and bringing a semblance of organisation and establishment back into our lives.

There was, inevitably, strife and tension between the governments but also a need for stability. They worked with the survivors to help humanity adapt to its new predicaments. Plans and processes were put into place to attempt to revitalize the fledgling economy and allow individual survivors the chance to survive, even thrive. Thus, the concept of Free Enterprise was born anew.

Today, legislation states that any scavenge is considered a legitimate trade and all individuals legal traders. With the digital ingenuity offered by the CORETECHS, anyone may set up a storefront, whether digital, physical, or both. Some will set up stalls, allowing you to physically peruse their goods, while others allow you view a virtual store wherever they are and deliver any items on the spot via drone.

Within cycles, a burgeoning and dynamic economy began to form. Supply and demand across systems and even between stations meant more travel and more trade. A commodity or piece of gear common and cheap on one station, may be highly sought after and expensive on another. Likewise, some vendors struck deals with the powerful corporations, selling their wares in their name across the galaxy, others ply what goods they scavenge. Looting the dead, however recently deceased, is technically scavenge. This, perhaps inevitably, has led to a certain ethical quandary when it comes to the gray area of how an object of scavenge may have met their end and subsequent looting thereof.

Yet others have branched out, specializing in different areas or even to specific genotypes. Offering goods and consumables for their specific type of physiology or cultural disposition. Individuals and even entire syndicates now are able to ply their wares on any station they feel most economically inclined to their particular goods at a given time.

On any station, across any number of systems, travelers will always be able to both find opportunities to buy and sell any number of scavenged, pillaged, or crafted goods that may benefit them directly, or be highly sought after in another part of the galaxy. In this way, Free Enterprise is a small, but perhaps vital aspect that helps to breathe life back into what remains of humanity.