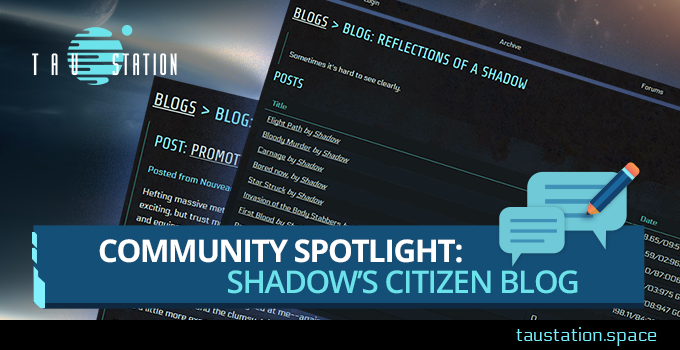 For today’s Community Spotlight, we return again to one of our previous winners. And for good reason. We have been very impressed by everyone’s Citizen Blog posts, but today we are going to focus on one in particular. Not only are Shadow’s posts well written, but he does an exemplary job at filling out the Tau Station universe with his own stories.

Shadow has fully immersed himself in the game, and his blog posts reflect this, as can be seen in, “Promoting the General Welfare,” where he creates a detailed story from something as simple as a Career Task. This post is a hilarious look at why a Port Technician might fail their attempts to work their day job, delving deeper into the outcome and exploring why they might have been sent to Sick Bay.

For example, Shadow took something as simple as the outcome message, “You botch your repairs and your supervisor takes over,” and turned it into a monumental event for his character:

And then the panel gave way and I crashed to the Port floor… where Charlie stood above me, chomping on his ever-present unlit cigar and calmly spraying suppressant foam on the thruster.  And on me.

It was over in mere units. I gazed up at him, picturing how I must look: bruised, battered, bleeding, and bedraggled.

And it was at that particular moment that the agonizing shriek of torn metal announced the thruster’s decision to separate from its mount entirely and smash down on the floor beside me.

As well as creating stories from his character’s own experiences, Shadow writes about the greater community at large. When another player went on a PvP spree, Shadow wrote a post entitled, “Bloody Murder,” which dramatically recounted the other player’s relentless attacks:

Someone–or something–is murdering its way across the ‘verse, leaving only corpses in its wake.

His immersion into the game’s story and his attention to detail all serve to make Shadow’s stories richer and places them solidly in the Tau Station universe. His writing reflects the language of the game, never breaking character and feeling like it’s come straight out of one of the missions. Whether it be lingo used by NPCs, “You can regale me with the latest tales of the Black,” or tackling the, at first, confusing time jargon: “See you in a few segments,” Shadow’s lines could be from a mission or Archive entry that’s part of the game itself.

The most important thing that Shadow, and others, have done is made Tau Station a deeper, richer, and more interesting place with his own stories. The Citizen Blogs were designed with exactly this in mind. That our players will flesh out the universe with their own experiences. That Tau Station will become theirs, and grow with their contributions. That, as they explore our stories, they will add to and enhance the story and the ‘verse. 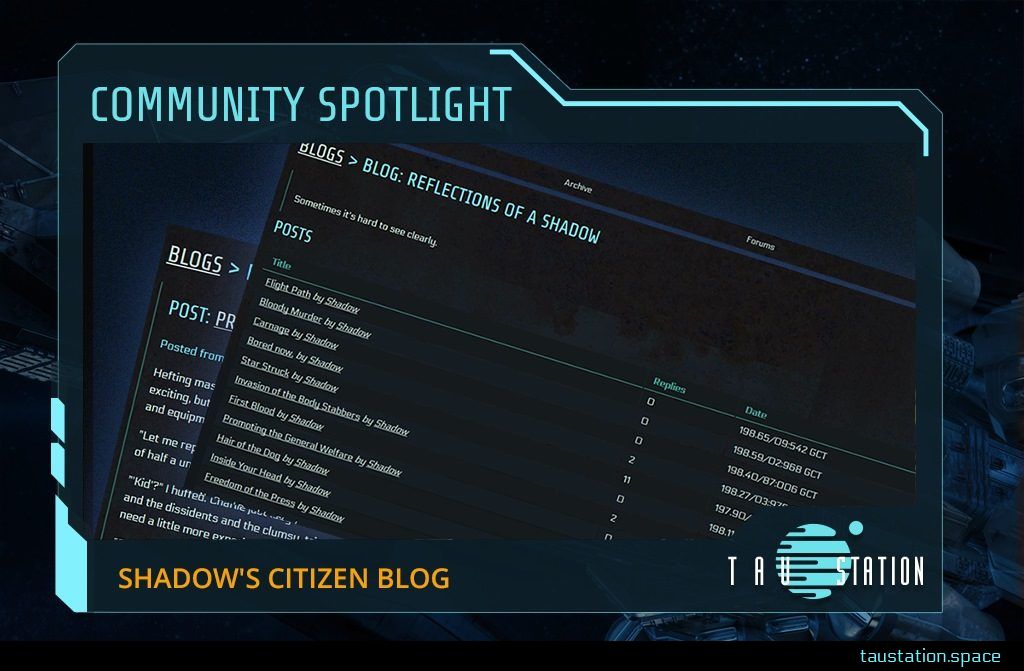 Thank you, citizen Shadow! And to all the others who have been doing this as well! We see your posts! We read your words, and we’re inspired by how deeply invested in the story, the universe, and the game you’ve all become.