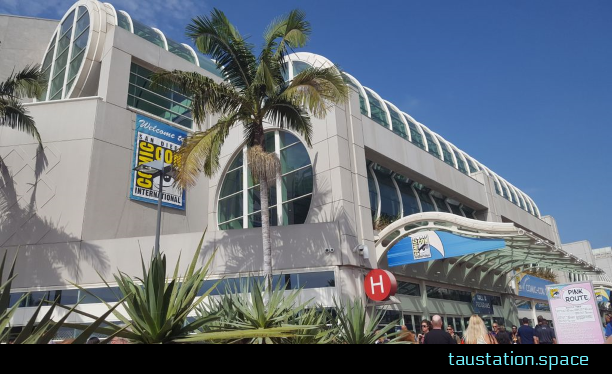 Lights flicker against the summer marine haze of a San Diego dusk. Sounds of anticipation and joy seem to swell from the very ground itself. The glistening paints hues over the rumble: the giggy glee and excitement of a little slice of magic here on Earth: Comic Con. A time and place of celebration and freedom, Comic Con calls to a part of us all.

For four days fandoms collide to simultaneously give thanks and be thanked for and by their favorite creative pop-culture properties. Teams from television, films, animes, games, mangas & comics anxiously await the chance to meet the people who hold sacred the work they do. That encounter and exchange is a beautiful one. There is a spectacular synergy in the air. We are just as excited to see you and you are to see us. It is a unique perk of the Con scene that can not be underscored enough: meeting you matters to us.

Read on below for Erin’s personal Comic Con recap about the event and her part in the panel talk, “Writing for the Computer Gaming Industry”. Also, enjoy the photos from the event and our new game flyer! 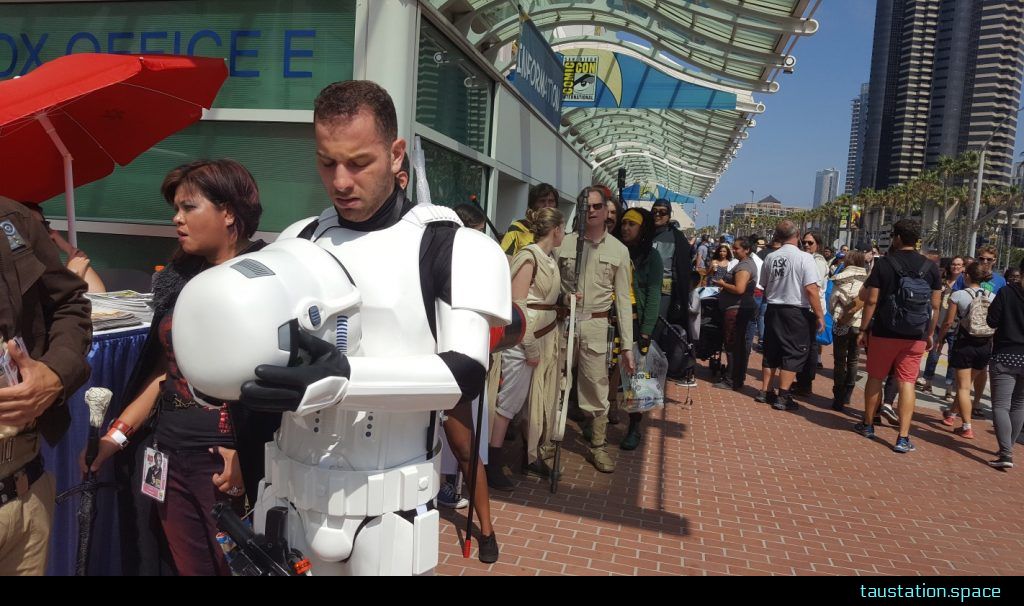 Preparing for the Panel Talk

I arrived at the panel that I was scheduled to speak on a little earlier than I probably should have. The doors to the room were shut and the faint mutter through the hinges suggested that it was the Star Trek panel that I really had wanted to see. Alas, I was too late for that and too early for mine, so I flashed a smile and eye-roll to an attendant who returned a shake of her head and a lifted shoulder. Behind me was a coiling snake of a line who stood with expressions of fidgety excitement. With a surprised sound emitting from somewhere accidental in my throat, I turned to the attendant and asked, “Is that the line for…?”
“The next panel,”, She said.
“The Writing for Computer Gaming Industry?” I asked.
“That’s the next panel,” She offered with a friendly, yet tired nod.
“That’s my panel! I’m on that panel!” I quietly gushed while covering my mouth with my hand. My eyebrows must have nearly touched my hairline from shock.
She didn’t really have much more than a chortle for a response. I’m sure she had at least one participant per panel go a little goonie at the sight of the line of bodies that cue up to willingly stand around for over an hour. It is, after all a thing you do at cons: you cue up with a row of strangers that could quickly become friends to see a group of people talk on a subject in which you and your hundred new friends have a solid mutual interest.

I was impressed, amazed, grateful…so I did what anyone would do in my situation of awe: I went to the line and started chatting.

I’ve had people react to me in all sorts of ways throughout my career but I don’t think I’ve ever felt something quite like that. The excitement was incredible. 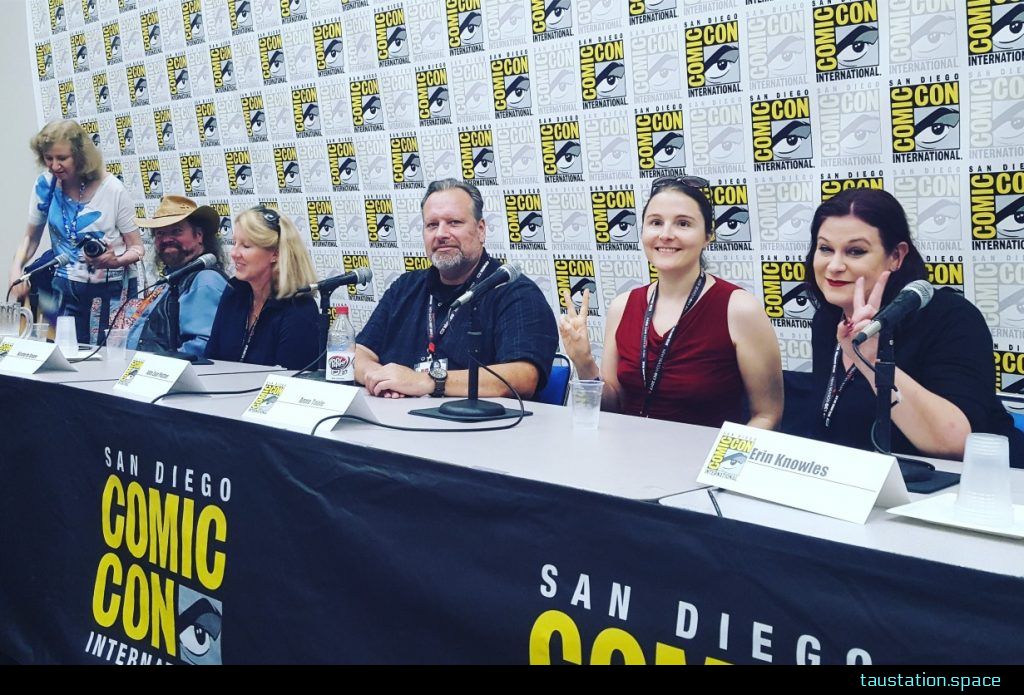 Among all of the vibrant people I met in that line, I met a young woman stand-out named Kyra. She stood toward the end with a friend and must have been about the age of an undergraduate. She was embodied joy, and even that is an understatement. As she spoke and asked a rapid-fire series of well-rehearsed questions, I saw in her the fire. Hers is a mind that could create worlds, and I told her as much. In that moment between my words ending and her slight tears starting I realized something incredible: that moment, in all of it’s absolute usualness, there was a portal through which I was being permitted to speak to the future. I knew it. She knew it.
She wanted to know absolutely everything about Tau Station. She wanted to know how the writers write, how it all comes together, how we bring it all to life.

“Ah,” I felt like an old samurai singled out from my usual band, “…we trust each other,” I offered before feeling like I had been too vague, “We complement each other. I want the others to succeed. They want me to succeed. We want, in each other, the best creation in writing possible. We want to do the very best that can be done, and really, that emanates through the whole Tau team. We all know we can do amazing things together. We are unified. A family.”

The other panelists began to arrive and I started to pull away from the chat with Kyra. I wanted to split myself down the center at that moment. I wanted to be in both worlds: both in the cue and on the panel. I was, after all, the rookie: surrounded by a host of writers whose works I have admired for years. I’ve come so far, worked so hard, and had the pride of being a part of Tau on my side, but a little tiny piece of me wanted to duck back into the cue. It didn’t take long to figure out why: I saw myself standing there when I looked at Kyra. I remember what it was to have a wildfire raging within my heart and those first few steps into the world of the written word. I remember sitting 4am tv glow darkened rooms with a controller in my hands and hot tears ripping down my cheeks at the emotional journey I had just been on with a game. I still have soundtracks that will instantly return me to a time and place and render me utterly overwrought for the memory of the story that the song punctuated. I know that look that she had on her face as I shook her hand goodbye. The panel was starting, I had to go. 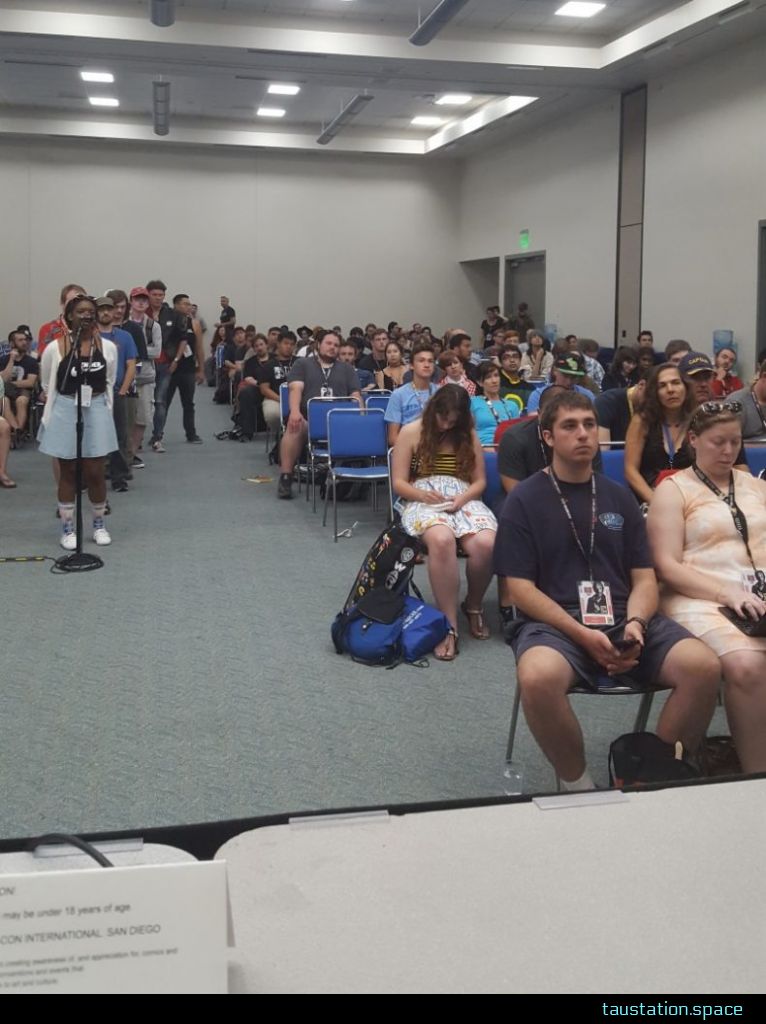 A lot of Questions and even more Passion

The panel talk whizzed past. Mostly questions about how the job of writing works floated by an interested audience before we spoke on our individual projects. There was surprise and excitement at the mention of “the post-scarcity space MMO in which you build your character and follow the paths you wish and…with Tau Station, we want you to want to exist within the game. We want you to inhabit the game…We work very hard to provide the compelling content required of such a serious task.”

It was love. Here was a unique group of people in the audience: people who wish to write for games and gamers themselves and by their expressions I could feel it: they not only understood what Tau Station was all about, they were excited for it. Seeing their excitement made me excited. The cycle that is made in the particular conditions on a Con scene was met: excitement and gratitude given, excitement and gratitude received.

Kyra was the first up to ask a question of the panel. She was the last to leave the room when we closed. She lingered and shook my hand and, with fearful awareness that I may never see her again, I gave her my personal email address and asked her to keep in touch. I told her that I’d like to know how her career is going and I’ll always be available to chat.

The universe is a very big place, after all. Let’s keep little pockets of magic like Comic Con as sacred as the connection between the creator and the consumer as often, we are just one in the same.

Shine on you crazy diamonds.

Our new Tau Station flyer & more photos for you

The new flyer was created for the event in San Diego and it was a nice and motivating feeling to see that it was selling like hot cakes. 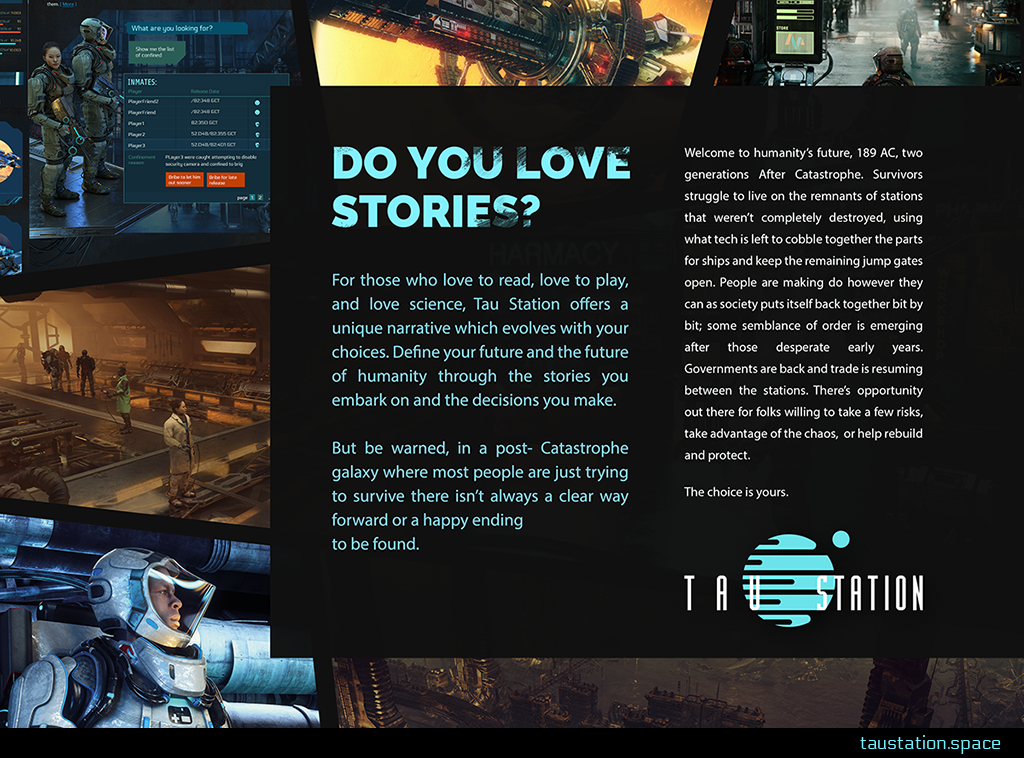 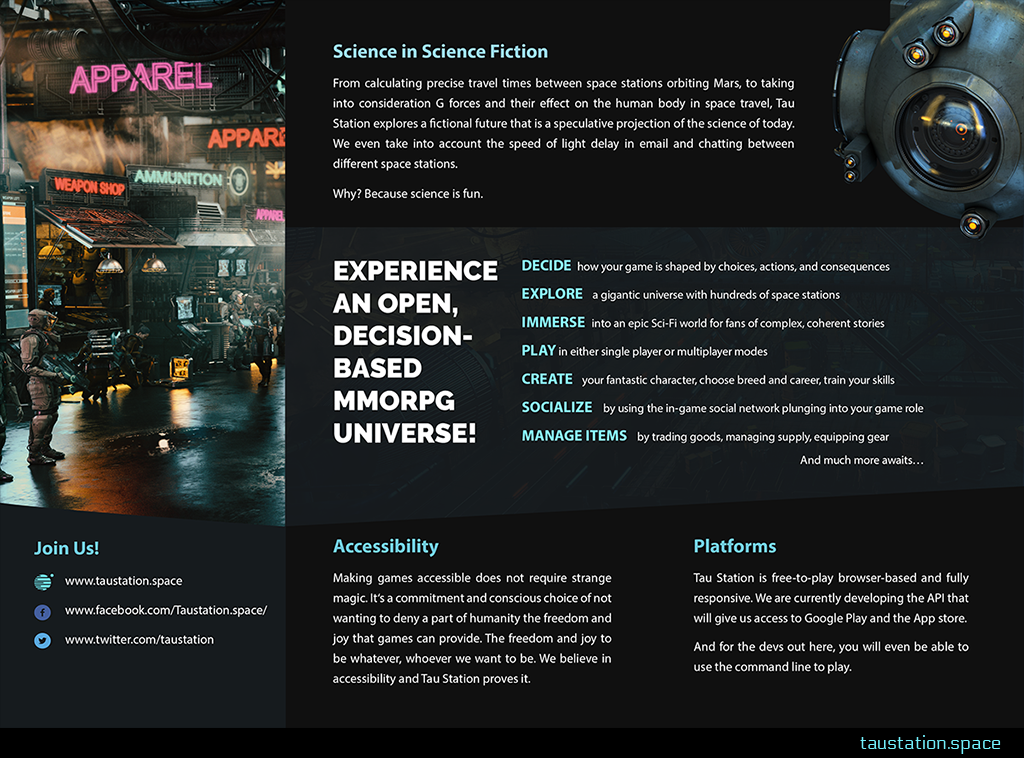 Some further impressions of Comic Con for you with passionate fans, interesting schedules and sunny weather. 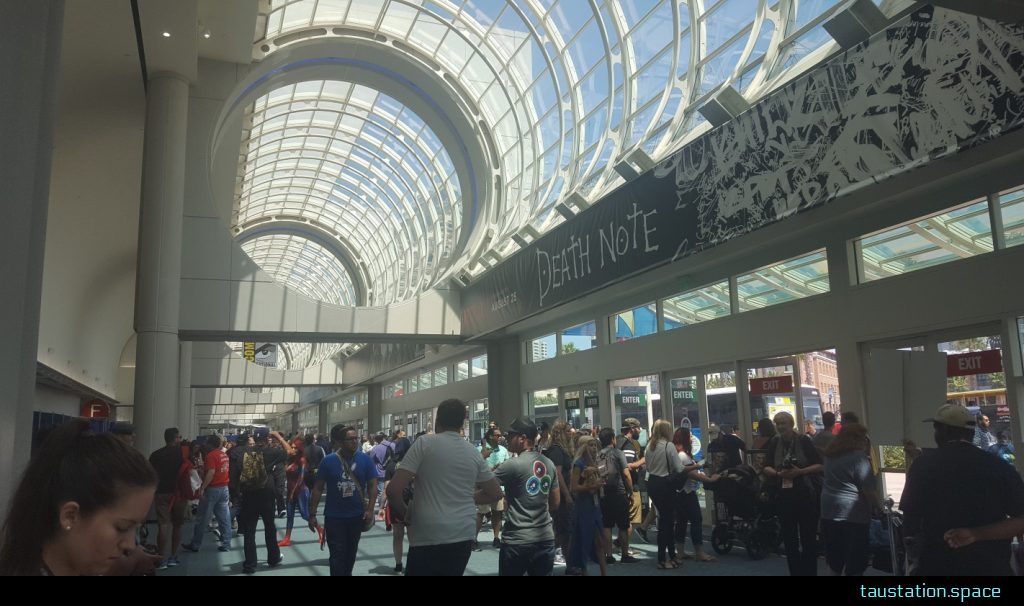 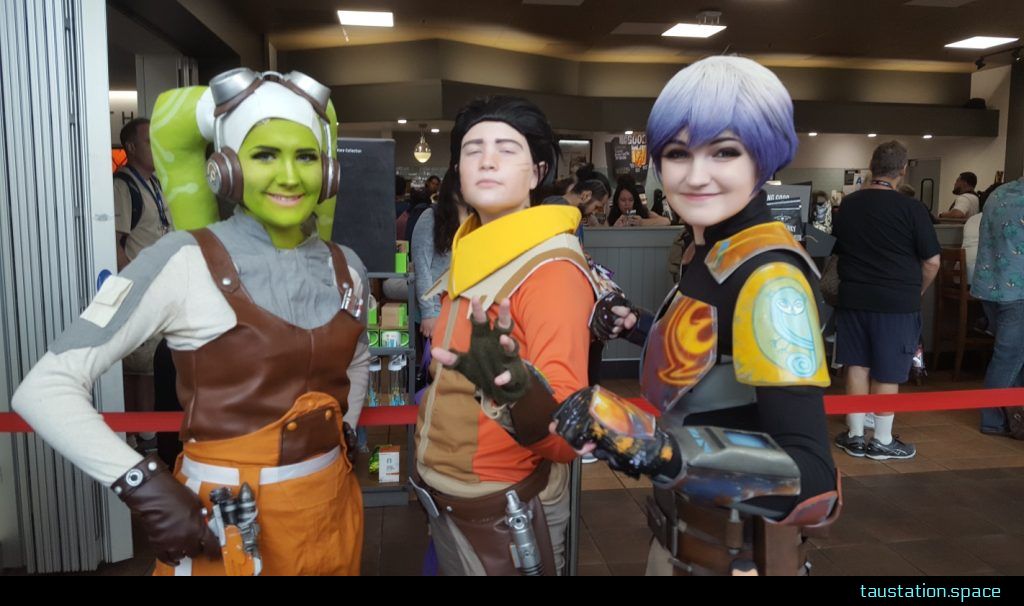 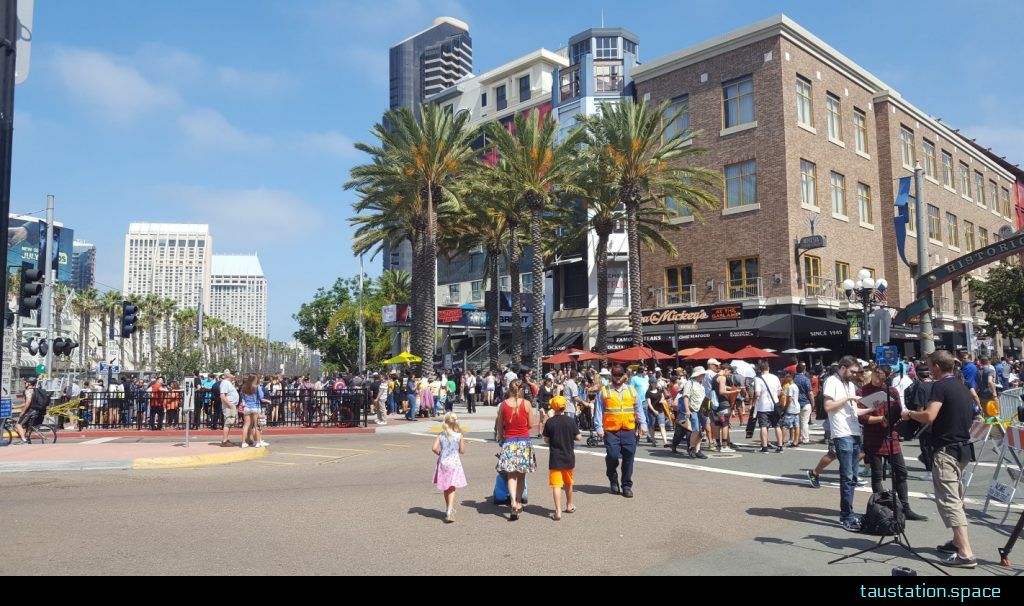 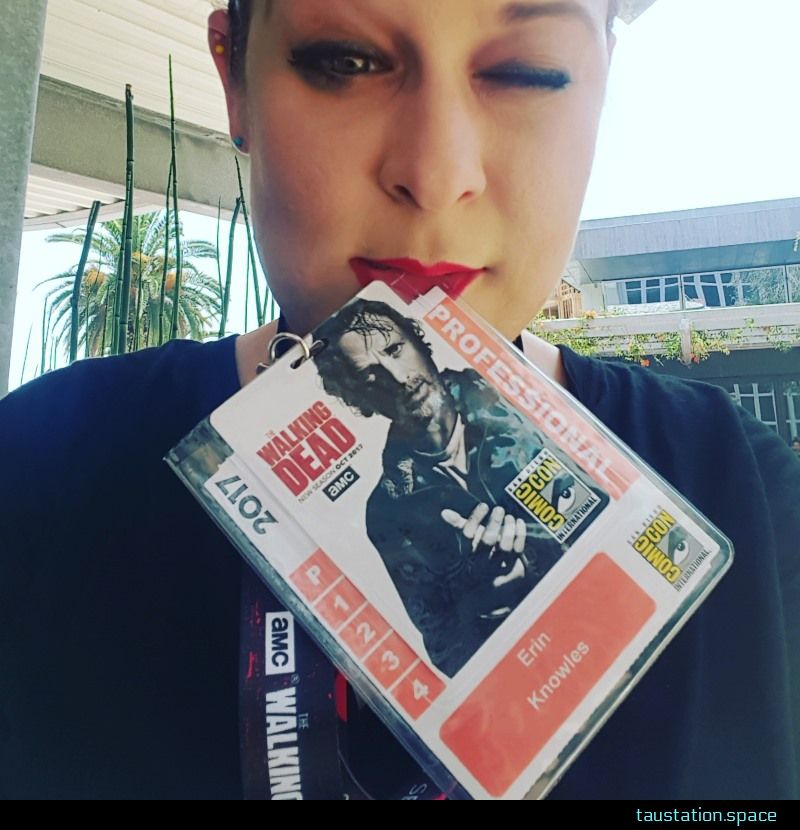 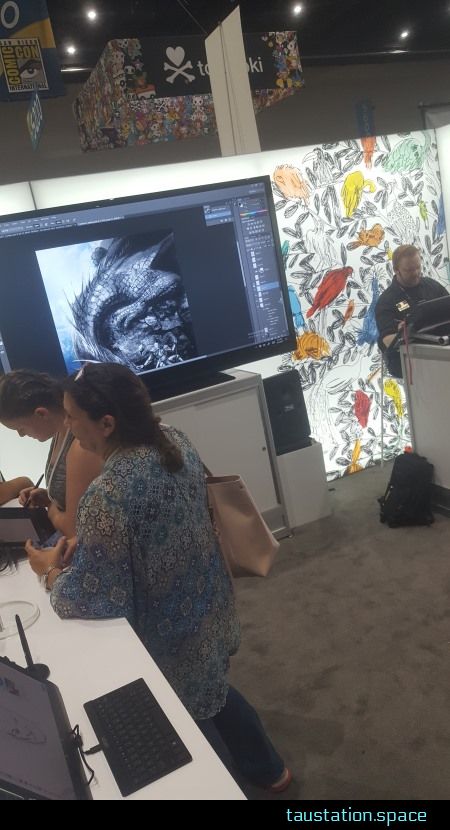 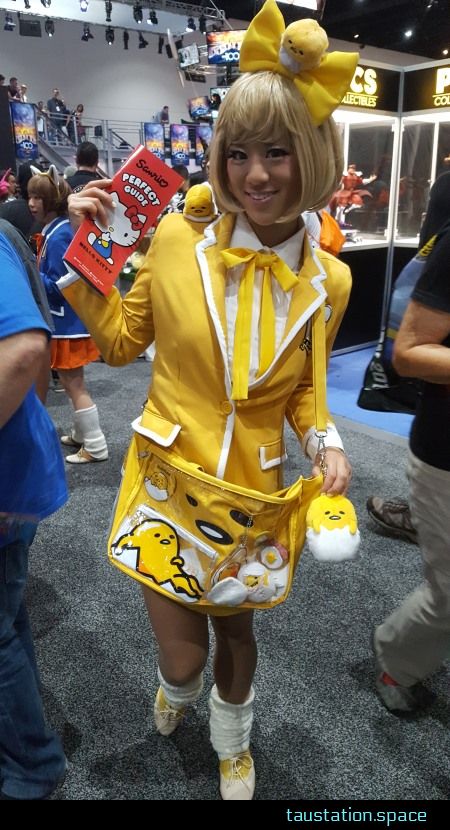 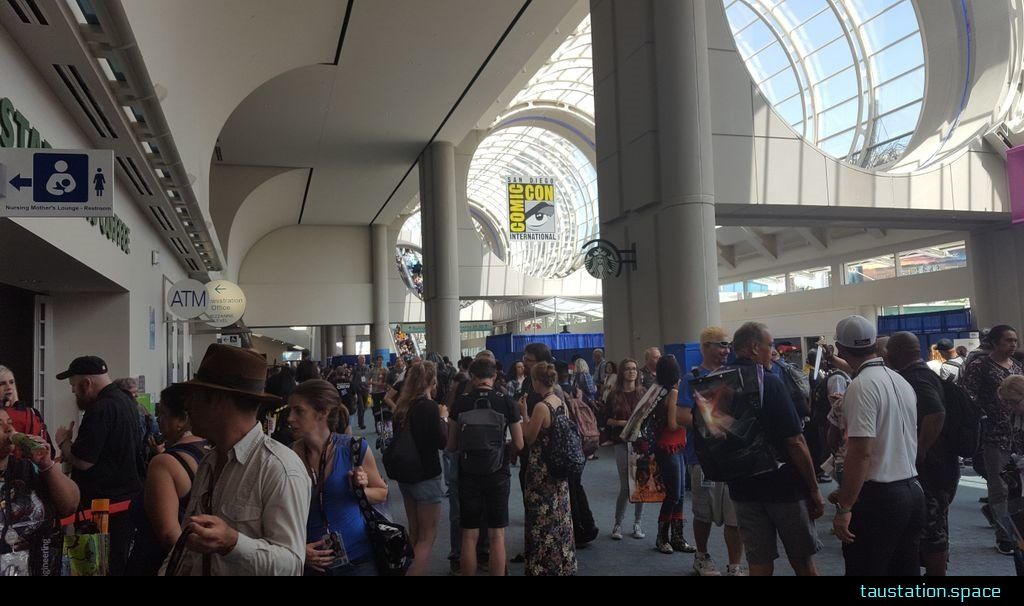 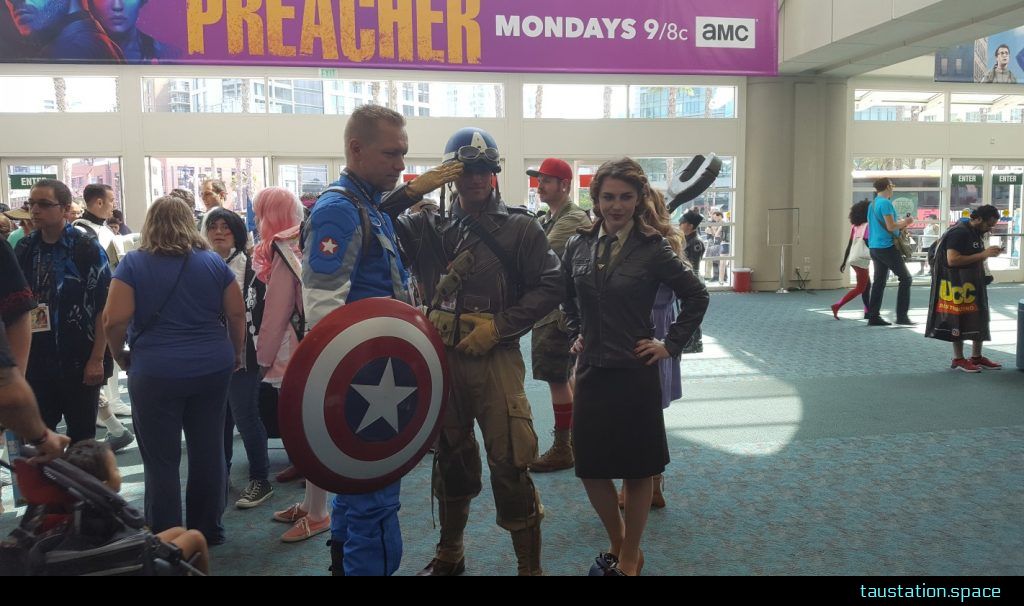