“Hey, you, adventurer. I have something for you to do. I lost my energy hammer in the ruins, right above the Pit of Eternal Suffering. Can you retrieve it for me? If you succeed in this task, I’ll award you with a brand-new energy hammer!” Sounds familiar? In today’s Tip of the Day, we’re going to talk about missions!

What to expect from missions? Choices

As you may already know, missions are the core of Tau Station. Missions are primarily lore-related and are the doors through which you can walk to become fully immersed in the story of Tau Station. These missions are given by specific NPCs and are not repeatable once finished, so make your choices wisely, as what you do will impact the universe and the storyline.

Missions serve several purposes, and there are many ways of completing them, depending on your skills and your way of doing things. Decisions are consequently a key factor in the success or failure of a given mission. Every now and then you will have to make a choice from different options, and those choices will not always be easy: Some people are stealing water in the ruins and the chief of security asks you to stop them. Once you investigate, you realize that the thieves are just poor people stealing just enough water to grow plants to feed themselves and their children. Do you turn them in or do you keep what you saw for yourself? That is the kind of choice you will be confronted with in the lore-related missions of Tau Station.

The role of stats

Obviously, you will at times have to take action in the game and this is where stats join the party. As we explained in Tip of the Day #4, stats are used to pass challenges in the game, and particularly, during missions you will have to use stats in order to complete your tasks. Each action will use a portion of the corresponding stat. To remember a conversation and report it correctly you will have to use your Intelligence, for example. The amount of points used in each attempt is based on the difficulty of the task, and on the level of said stat of your character. Happen to run out of stats? Use a stim or eat a ration. Your stats will replenish, and you will be good to continue your mission.

It might happen that you don’t have the time or the resources to finish a mission in one sitting. If this happens, don’t worry, you’ll have all the time you want to finish it later. You just need to go back to the NPC or the area where the mission was going on and you can continue. Can’t remember what was the mission about? Just go to the log of the mission by clicking on its name via the Current Mission menu and everything you need to know will be available there. Plus, you can also check which missions you have already done and whether it was a success or not!

Unfortunately, as in real life, you can’t always predict whether or not you will succeed at a given task, and sometimes even if you are the best in your field, failure will happen. There is always a small chance to fail or succeed at any task, no matter your skill or the task’s difficulty. This is what we commonly call, “luck.”

Speaking of luck, one of the cool things about missions is that sometimes you will be given extra rewards for completing one. Basic rewards for a mission are a certain amount of experience towards your level, plus a bit of money. From time to time, however, you might also receive items or stat increases from completing a mission! How cool is that?

The many types of missions in Tau Station will help you mold both your character and your experience. What paths will you choose? What tasks will you take up to improve your lot in life? Happy adventuring, and… good luck! 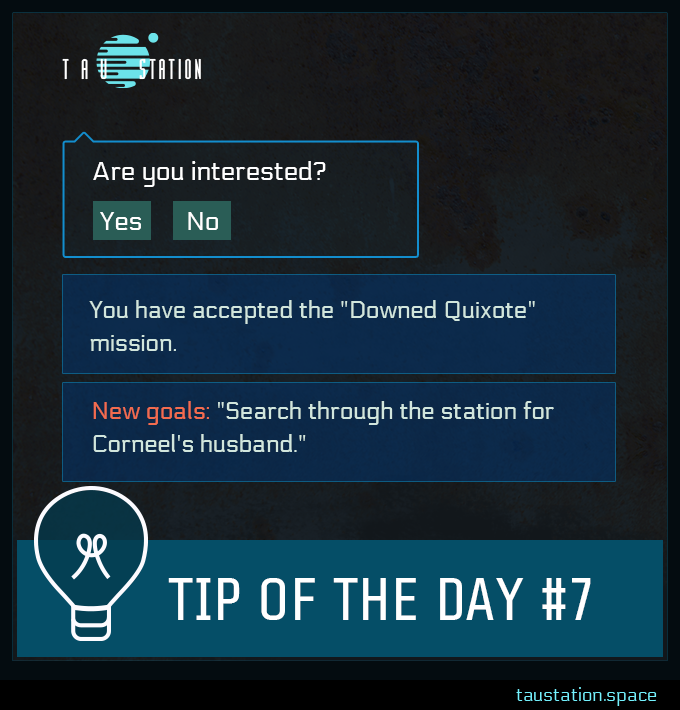 And that’s not all. There’s more to come: our Mission Builder tool has been in further development, to improve existing features and to add new features such as enemy encounters, while the narrative team keeps creating thrilling stories for you!