What is best in life? To crush your enemies. See them driven before you. That’s right, in today’s Tip of the Day we are talking about combat!

In the Tau Station universe, combat is not encouraged, but you will surely stumble upon it at one time or another, and you’ll want to be ready for when it finally comes. In yesterday’s Tip of the Day we talked about that you can equip 2 weapons and a suit of armor at a time. These items will be essential in fights – the better your items the easier you will overcome your enemies.

Weapons can do up to 3 different types of damage: piercing, energy, or impact. During combat, the type of damage your weapon can inflict will be compared to the corresponding type of defense of your enemy’s armor. For example, a weapon that does piercing damage will be less effective against armor that provides defense against this type of attack. Each weapon also has an accuracy score, which will determine how likely a weapon is to hit an enemy. The higher the accuracy score, the better. 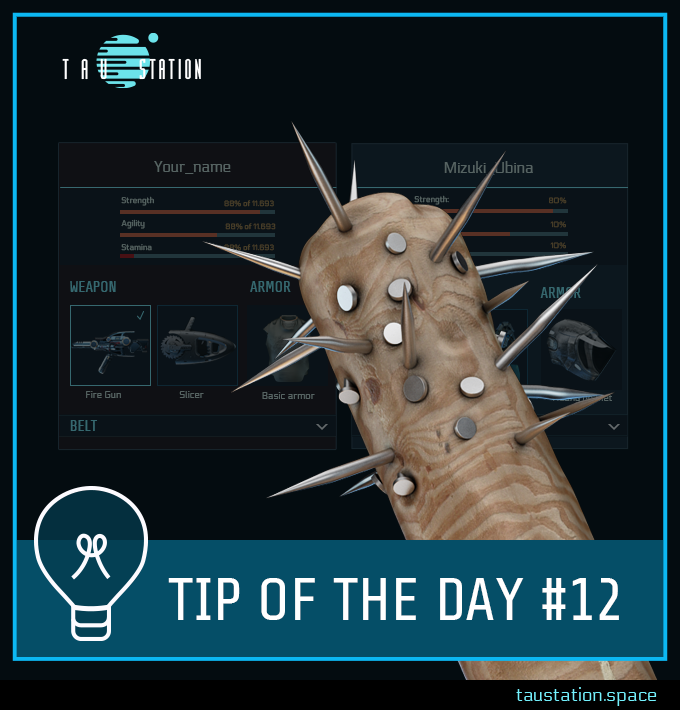 Combat is turn based, and you chose what to do each round of combat. When you attack someone, they will always get the first round and then it will be your turn. The different actions available are Attack, Use an Item from your belt, and to try to Flee. When attacking, we consider a combination of your physical stats, focus, and level, and compare that to your opponents to determine your chance to hit. If you miss, you don’t do damage, but if you hit, your Strength stat, plus your weapon’s damage and repair level, is compared to the Stamina stat of your opponent plus their armor’s defense against the weapon type, and your armor’s repair level. This determines how much damage you deal to their Stamina. Combat is over when either you or your opponent has any physical stat reach zero percent, if you got caught by security, or if someone manages to flee.

Of course, you can also take advanced combat courses to give you increased chances for critical hits and damage from critical hits.

There’s more to the combat system than this, but we should leave at least a little bit for you to discover.

During combat, the only items aside from weapons and armor that are usable are those that are stored on your belt. Don’t forget to place useful items, like stim packs, there before initiating combat. You can see what equipment your opponent is wielding, but you can’t see what type of objects they have on their belt. The combat belt does not start unlocked, however. You can unlock  three slot combat belt via the Combat Utilities 1 course at Tau Station’s University. You will also have the opportunity to unlock 4 more slots by taking additional courses.

Be prepared at all times

Being attacked and being the assaulter doesn’t have the same meaning in Tau Station. When you undergo an attack from someone, you will not actually have the opportunity to fight back, your character will defend themself automatically. This means that you should be prepared to encounter combat at all times, and that you should be well-equipped in order to survive. Another tip we can give you is that you should be renting a room at the Inn.  Indeed, once you leave Tau Station, a Guest Room is the only place on other stations where you cannot be attacked by other players, as they can’t actually see you there. Safety is only a few credits away!

Be careful with fights

As we mentioned before, combat is not well tolerated by the authorities and station residents. If you’re not caught right away when you attack someone, people witnessing your crime, or the local security cameras, will surely warn the nearest guards right away, and it will only be a matter of time before they come to arrest you and send you to the Brig. So, don’t take your time while gutting your opponent.

Once you manage to kill your opponent, you’ll have the opportunity to loot their body and steal some credits.

So, chose your target carefully!