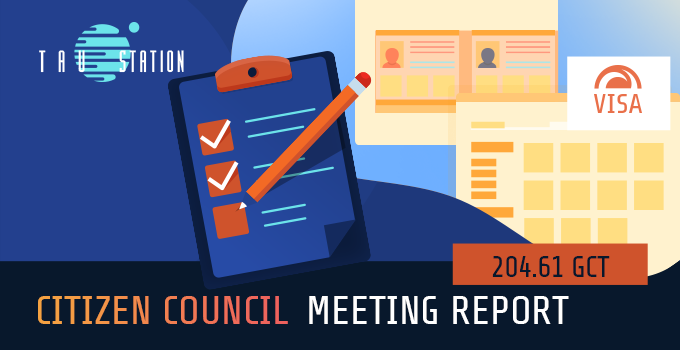 Just 200 segments ago, the Citizen Council met with the Tau Station team. Today, we would love to share what has been discussed in our first video meeting with your newly elected representatives.

First of all, much thanks to everyone! It was amazing, because the entire Council participated while the Tau Station team was represented by Leila, Curtis, Pete, Noel and StarGazer. The discussion lasted 17 segments – impressive!

The Meeting in a nut shell

After welcoming everyone, Dotsent presented the topics the Citizen Council had discussed and prepared for this meeting:

In the second part of the video conference, Leila continued by sharing some first insights about what will come next. This was followed by an open discussion. – After 4 hours of a very productive call, the meeting ended around midnight for the European participants.

At the beginning, Dotsent explained what the Council members did in their first call after the elections. They discussed procedures, thanked the previous Council members and elected their officers. During their second meeting, issues were voted which resulted in the topic list for this meeting. Furthermore, they discussed various points and general direction.

Finally, we started with the list of topics your Citizen Council has prepared and accepted in voting.

The initial points for this suggestion are two forum topics dealing with the idea (learn by disassembly, item recycling & blue prints).

Dotsent explained, while waiting for the main crafting system itself, implementing something simple would be nice, like getting the possibility of breaking items down into their basic resources. In order to connect the crafting system and disassembly, Citizens would have to first disassemble a shotgun, for example. This way you would acquire the skill of crafting this particular item. Another idea is that someone skilled in using shotguns could get more resources when disassembling a shotgun, because this way even basic skills would cause additional benefits.

Leila supports the idea, but sees it as an addition to courses (not as a replacement). Courses will give you the basic skills, but you might fail when doing it, but the more often you do it, the more experienced and the more efficient you get.

In conclusion, Leila explained that one of the prerequisites for crafting was the implementation of syndicate building. Once done, and happy with the functionality, we will implement crafting in a more general sense.

The origin of this approach is a forum discussion. Dotsent explained that, in general, the VISA situation is sometimes annoying and irritating due to the short duration. The main idea is bringing something new to the game, like university courses. Something suggested by Bandal is letting the reputation having an impact on the VISA duration, and someone “avoided” would either get only a short VISA or would have to pay a higher price. Maybe the request could even get denied. Geoff underlined the need of being able to recover from bad reputation via course or discreet work.

In regard to this suggestion, Leila explained that in addition to adding realism to the Universe, VISAs were also a way to bring more comfort to VIP, as as a VIP you can renew your visa on every station. To not take this benefit away from VIP, as we are handing over bonds every day through the career, the solution could be to allow people to renew their visa using bonds in the government center.

During the discussion, it was also brought up to think about eventually getting a bond option for non-VIPs in the Gov’t Center as well as extending their VISA.

Hotel Rooms – Locking Oneself In

Dotsent mentioned that there are several cases of not noticing when you actually left a hotel room. Now we have functionalities in ships that allow you to explicitly stay in your vessel until you leave the ship. The suggestion is to explicitly leave the hotel room the same way – like if you want to go somewhere else, you will use a special button to clearly leave the room.

Nevah shared his experience that this happens nearly daily on mobile, but not on desktop. In the original Council there were concerns about having an additional click.

There was an intense discussion about aspects like having various tabs open, etc. The conclusion from Leila, was that the team will be looking into it as this could always be a bug, however we need to take into consideration the new UI that we are going to implement, as it may well sort the issue.

The original discussion was started by Perleone on the forums. The basic idea behind it is to allow players to control how much they want to refuel instead of being forced to always buy the full tank.

Leila supports the approach: You should be able to use your ship with the money you have. It will be done at the same time that we implement the new Cockpit design.

There are two forum posts dealing with this topic (topic 1, topic 2). The intention is having more player collaboration. Part of this idea is not to simply open a Jump Gate right away with the introduction of a new system, but let the Community work on it in order to open it.

As a funny coincidence, it was always planned this way. Leila explained that in the past, we wanted to do it, but needed to open the new system Barnard’s Star for you. We’re just not here technically yet. Sometimes it takes a bit of time, but we do it! Like the team worked a lot on the combat changes you asked for, thanks to Pete and Noel who joined us. You asked for direct credit transfer which we didn’t add, but the private trades. We want to have the coop-feature for opening a jump gate – you will get it, but there is no deadline for now.

Bob-Simpson started this topic with a forum post. The basic idea is to allow entire syndicates being marked as friends or foes, similar to single player, and as a result, all members see others flagged accordingly.

Leila fully supported this suggestion, as is part of the gameplay needed for syndicate resources war and much more. As soon as she agreed the Councils members jump on the opportunity to ask to increase, the standard friend list. It was agreed to provide the ability to increase friend list thought the usage of bonds and leveling.

The talk was quite extensive and we touched many topics. As it was so much, do not hesitate to get in touch with your Citizen Council representatives. Here are some impressions about the second part of the video conference.

What we also discussed

Leila shared a preview of the new combat UI (see below). In general, we continue working on the brand new UI and preparing interactive combat which includes several additions for combat system like using intelligence in the future, new rush & retreat options, using grenades, and more. Noel from our dev team explained that we get a new combat engine underneath rather than hard coding it. This allows us to easier transport any changes from PVP what we’ve been working on as a starting point now, it into everything else using combat.

Nevah shared his personal experience with the missions; it would be great having a place to go back to in order to re-read the stories rather than re-playing them. Leila explained that side stories are more about the feeling; the upcoming core missions will create the main story and you’ll have a summary like a note book, depending on your findings. The other story is more about the universe, making you think about society (therefore not a big issue if you don’t remember that much). Something new in our mission builder is that we can link missions, depending on the outcome of the previous mission!

Nevah asked StarGazer to create a pinned post on the main forum to ask all Citizens for posting their suggestions on the Council forums as intended. This has already been done.

Leila summed up, what will happen next:

Tau Station now has plenty of gameplay, it’s time to make the overall experience more pleasant if we wants to be true to our vision of Tau Station: a Place to live and share with your friends.

Last, but not least – here’s a sneak peak about the new W.I.P. combat interface: 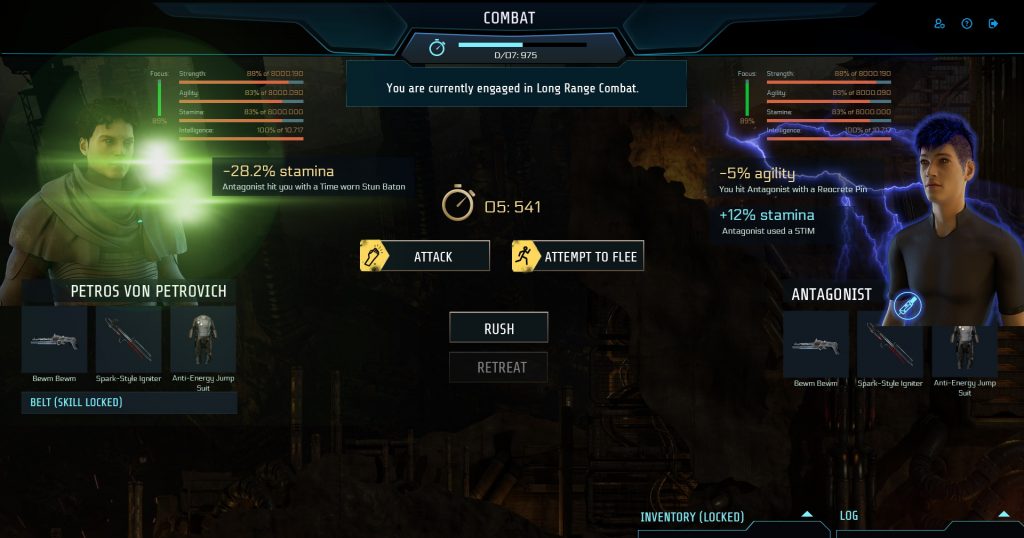 See you in space, Citizens!