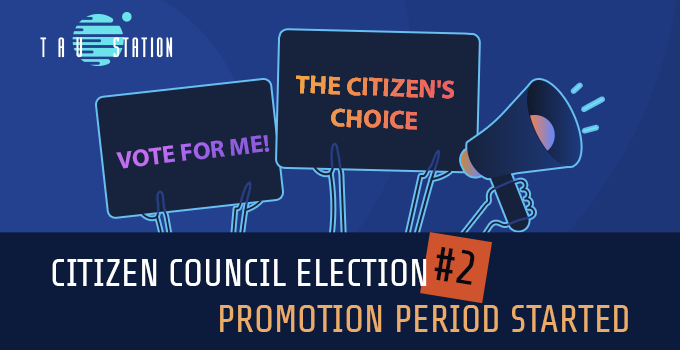 We’re about to enter the last preparation phase before the new Citizen Council (CC) election starts in November! In a few days, we will reveal all the candidates who are asking our Community for their votes.

As of Monday, there are 14 days (what are weeks?)  to learn more about the candidates. In answer to two questions that came up during the last election: yes, candidates can vote as well, because they are still Community members. And yes, they are even allowed to vote for themselves.

Dear Citizens, the Citizen Council section will be updated this Wednesday via a small game update. This also means you’ll get several fixes and some combat balancing even earlier than planned.

As a result, we’ve modified the schedule for the remaining election steps:

The current plan is that our team will update the CC members page next Monday after StarGazer passes on the candidate statement texts to the dev team for implementation. But rumors in Tau Station suggest some sneaky candidates have even posted their candidacy text on their profile…

After Monday, this updated page will feature all candidates’ personal messages, written to win your support. As communication is crucial, do not hesitate to get in touch with each of them to ask further questions either in chat or via game mail. A mail button can be found below every single candidate.

We’re very grateful to everyone who applied,and showed a willingness to continue the awesome job of the first Council!

In September, we shared a special article about the most recent (and final) meeting between your first Citizen Council and the Tau Station team. The notes about the “Open Discussion” mention something very important to us which shall be repeated here again: we enjoy the cooperation and will never forget your support. It makes our work even more meaningful! Therefore, the team has been working on a new archive page that will acknowledge and immortalize all former Citizen Council members right in the game!

In this phase, we get in touch with everyone who applied to become a Citizen Council member, asking for NDA details and a personal promotion text which is needed for phase 3.

3. Promotion Period: About to Start!

All the approved candidates can promote themselves. These personal texts will be showcased right in the game, on the Council page. The team will update the page

For those who don’t know what the CC does, you can find all details in the original blog which introduced our beloved Community feature in January 2019.

A friendly reminder about a detail change: starting with this second CC, all board members will be elected for a period of 3 cycles (300 days).