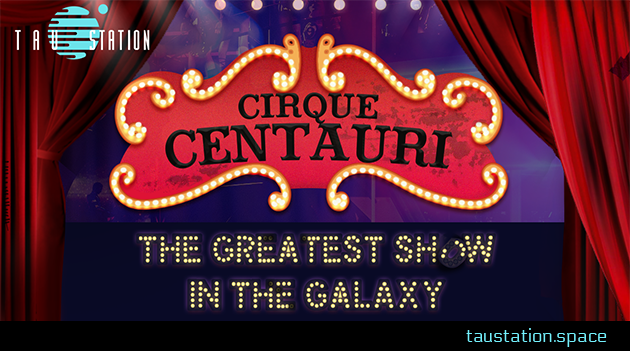 Cirque Centauri, once a mecca of leisure, hospitality, and entertainment, is again open for business. Back in its Golden Era, the station was a luxury destination for travelers wishing to see death-defying acts, go on thrilling rides, bask in opulence, and sample delicacies from all over the star systems. At one time a thriving station with high-end hotels, galaxy-class restaurants, a spectacular circus, and the finest of recreational activities, Cirque Centauri was the gem of the system, with visitors traveling from far and wide to indulge in the station’s wonders and delights. Until it all came crashing down…

When the Catastrophe struck, and explosions ripped through Cirque Centauri as the power grid overloaded. The blasts sent fires ravaging through the station, streets cracked and collapsed, buildings toppled, and tens of thousands of inhabitants and guests were killed in the waves of destruction.

The Struggle for Survival

Incredibly, a lucky few survived. In the aftermath, the survivors mainly tried to get by, salvaging what they could from the destruction. Communications were offline for the entire station, the docked starcruisers and other ships were too damaged to leave, and most of the pilots and travelers had perished. Cut off from the outside world, those left on the station banded together, performers alongside guests, to stay alive. As people recovered and made their way back to the center of the station, various groups vied for power and control, destroying buildings, sections of the station, and each other in the process. Eventually, the Gaule Protectorate rediscovered the station, and a contingent who wished to live together in harmony, with the help of Gaule soldiers, were able to oust those who were trying to simply dominate and control the station. Those disharmonious few fled outside of the walls of the Safe Zone generations ago. It is assumed that the unstable buildings and crumbling infrastructure took care of the uncomfortable problem they were, as nothing has been heard from them since.

The streets beneath the golden skyscrapers are cracked and full of debris now. The huge, Catastrophe ravaged buildings are an unstable hazard, in danger of toppling at any moment on those below. However, the ruins of previously well-groomed neighborhoods, posh hotels, and vibrant offices that were neglected, and in some cases destroyed, are now being slowly reclaimed from the destruction. As the decades passed, the station slowly started back down the path in an attempt to reclaim its former glory. Cirque Centauri is now in a phase some call “the Recovery.” The center of the station became the Safe Zone, which is slowly expanding outwards recovering and reclaiming more and more of what once was. To keep guests and residents safe, a wall has been erected around the perimeter of this zone. It is not recommended that anyone travels outside of it, though there are rumors that there are squatters living among the dangerous ruins.

The Show Must Go On

With the reopening of the jump gates, and the slow improvement in the galaxy-wide economy, Cirque Centauri has opened its docking bays once more for guests. A big top, with two daily shows, has raised its striped tent, and luxury hotels have begun to reopen. Guests come to Cirque Centauri to relax, have adventures, bask in the luxuries offered, and sample delicacies not found anywhere else in the galaxy. Visitors come to shop in Moonlight Square Plaza, also called, “the Night Market,” as the high ceiling is programmed to always display an indigo sky full of twinkling stars. The marketplace sprung up organically around the circus, and has spread outward for generations. There is now a maze of stalls, booths, and kiosks, full of goods from all around the galaxy. One could wander for hours, playing games of chance, sampling delicacies, riding the rides, and being entertained by the wandering performers.

There are sumptuous treats to be had for those that can afford the rare delicacies, but many who live on the station cannot themselves afford to indulge. An outer portrayal of openness, friendliness, and a welcoming demeanor masks the undercurrent of mistrust and resentment on the part of some of the station’s residents. The station locals both hate and love their outside visitors. Love them for the revenue and wealth that guests will bring, but despise them for the dependency the Cirque folk feel on them, and there is a bitter gap between those with means and those without.

As the ancient saying goes, “The show must go on,” and this is the Greatest Show in the Galaxy! Tourists travel from far and wide, and from the spaces in between, to see the sights, taste the exotic foods, be entertained by the galaxy’s greatest performers of death-defying feats, and enjoy luxuries found nowhere else in the known universe.