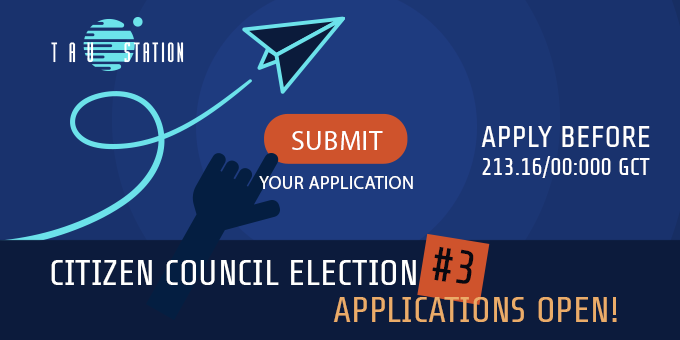 In March, we published a huge UI overhaul with desktop version 1.0. As announced in the preview for that major update, Tau Station is getting weekly updates again which brings us to another important step: We want to have the frequent meetings with your Citizen Council again!

So, here we go: Let’s prepare for the next election!

The Citizen Council (CC) is an elected board of community members who work closely with the dev team of Tau Station. Your representatives are an important aspect for the game development. That’s the reason why there is even a special section about the CC and a dedicated forum in our game!

The main purpose of the CC is to prioritize and prepare community topics, such as feature requests or improvement suggestions, for use in regular video calls with the dev team. During these sync meetings, the CC can raise topics and ask questions. Every now and then, we’ll share updated previews and insights about the current development in these special appointments.

For more details, please check the Council section in your CORETECHS.

Everyone who meets the following two conditions can vote:

Who can be elected?

In addition to the voting conditions, each CC candidate must also fulfill the following:

Please send us an email if you want to become a candidate for the election.

We will check all applicants to ensure they match the criteria for becoming a candidate in the election. Everyone will be informed about the result and the next steps.

All approved candidates are invited to write their vision statement, so all Citizens will know what they stand for. We’ll share their statements on our blog and in-game on the CC page. If you want to get an impression how it works, check out what the former candidates wrote.

The election will last for 7 days. A special character in Tau Station will collect all votes via game mails. Details will be shared in a further post later.

The results will be announced a few days after the election has ended, and the Citizen Council page will be updated to show the new elected board.

In case of questions, please do not hesitate to get in touch with us through in game chat, on our Discord or via email. If you’re thinking about applying, it could also be a good time to ask current Council members how they organized work, how much time they invested, etc to help you decide. Good luck!