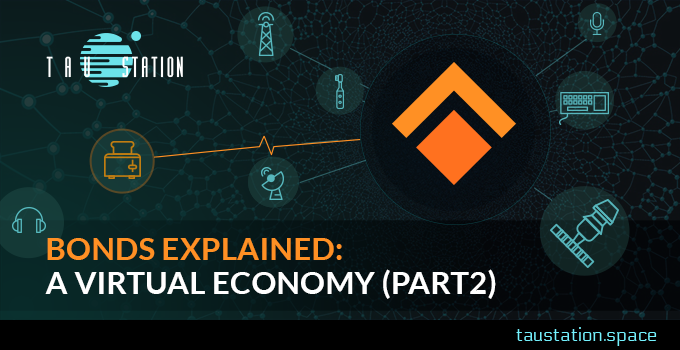 The credit may have only taken a few post-Catastrophe cycles to become humanity’s common currency. But its premium counterpart, the bond, was a much stranger discovery. It took far longer to find its place in the galaxy’s economic system.

Having been forged in the throes of the Catastrophe, this unusual technology fascinates many. Even today, debates rage about the true nature of bonds. What exactly are they? None can provide a full answer, but at least some things are agreed upon…

In the desperate aftermath of the Catastrophe, few paid heed to the unusual digital tokens (‘bonds’), which had appeared on many Mesh-linked systems. The havoc presented more pressing challenges. Food, water, and air occupied survivors’ thoughts instead.

But over time, as tech was re-activated to aid recovery, the mystery of bonds came to the fore. None recalled these strange tokens from the Before. All evidence pointed to them being created during the Catastrophe itself. This sinister correlation troubled many. What were these mementos of the disaster? Could they be the digital footsteps of our ruthless attacker?

From fear to bafflement

Despite this correlation with cataclysm, little else about bonds suggested danger. Could they really be part of the terrifying weapon which had reduced civilization to ruins?

It seemed unlikely. For starters, these digital tokens appeared mainly on non-essential systems, unrelated to survival. Some found their electric toothbrush had a bond or two assigned to it. A cocktail shaker in the local Bar had maybe three. But major lifeline systems which had failed with devastating consequences had none.

Curious observers noted something else too. The more powerful the object, the more bonds it had been ‘given’ during the Catastrophe. Gradually, fear of these digital curiosities gave way to bafflement.

After cycles of inspection and debate, a plausible theory emerged. Bonds were a type of reward, created by the Mesh as part of its own Catastrophe survival effort. In the midst of calamity, the Mesh minimized outages and failures by borrowing the resources of connected devices with spare processing power. In return, it offered bonds as a form of ‘payment’, proportional to the help given.

Normally the micro-processor in your electric toothbrush monitors your oral hygiene and health. But during the Catastrophe it assumed a grander role, acting as a temporary processor for the Mesh. Your docked ship’s idle batteries perhaps lent power. Likewise for coffee machines, room cleaner bots, and every other idle gadget in existence. The bonds offered as reward then sat on these devices’ drives until someone with admin access came along to collect.

This theory explains why bonds are digitally signed by the Mesh itself, and why all bonds originate from the Catastrophe. Bonds are, in essence, evidence of the Mesh’s in-built ‘immune system’ working.

Consortium and Gaule experts agree that the Catastrophe was likely the first activation of this capability. The Mesh behaves so only when the threat is sufficiently severe. (Charlatans who try to damage a Mesh node, hoping to trick its bond-giving defenses into activating, find this out the hard way).

What are bonds for?

If the aforementioned theory is correct, then a curious question arises: what are bonds actually for? What can they do? Why would an electronic system work to ‘earn’ them? Educated guesswork here spirals into spurious conjecture.

One idea is that these digital tokens are a form of ‘IOU’. Issued by the Mesh in a crisis, they can perhaps be honored somehow at a future date. And yet, how exactly this ‘debt’ can be redeemed, and what for, remains a mystery.

More than a cryptocurrency?

The only certainty is that bond systems worked during the Catastrophe. They’d probably do so again in the event of a repeat. And that’s why these odd digital tokens have become the galaxy’s premium currency. Wary survivors see bonds as ‘disaster-proof’, offering some security against the unknown.

Impossible to forge, hack or corrupt, bonds are secure and easy to transfer between users. They’re already handy for buying premium services on any station, but some speculate that their utility could increase further once the tech is better understood.

But for now, despite occasional hype bubbles wobbling exchange rates, bonds provide humanity with a reliable premium currency. Decentralized and backed by the Mesh, Citizens will find they’re accepted in all corners of the galaxy. Beyond that, all else is conjecture. Whether they’re just a quirky by-product of the Catastrophe, or possess some additional functionality remains to be seen.