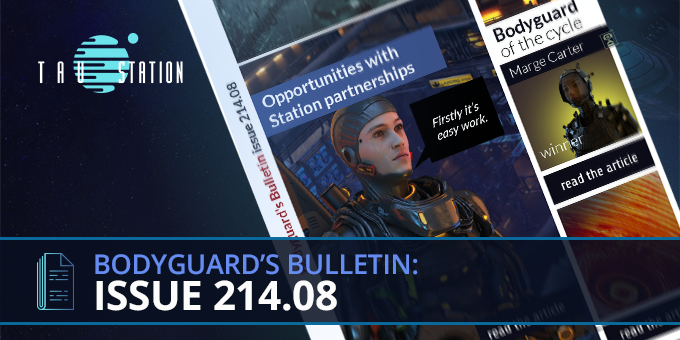 In this special segment, we want to highlight job progression within the industry and beyond. Back in my day, becoming a private bodyguard usually meant your military career was at an end, even joked as “semi-retirement” by some. Currently, the industry has changed and we are seeing more and more recruitment within our own members.

Take the example of Arnaud Callon, Tianjin’s Head of Security. He began, like many other Gaule citizens, joining the navy full-time after completing his military service. Within a few cycles, he joined the Armure Security Group and steadily rose up through the ranks, eventually heading up the private protection unit assigned to Moemedi Medical Supplies. He was then “head-hunted” by Etheel Hayes himself to lead security on the Independent station of Spirit of Tianjin.

A success story within our industry that is slowly becoming a standard, with increasingly more Independent stations looking at permanent measures for their security concerns. This specific example shows us all that it is never too late to aim high. Joining one of the private bodyguard groups can, and will lead to improved career advancement.

Draco’s tip: Work hard and your efforts will be rewarded!

Great news for private security! An increased number of stations have begun long-term deals with bodyguard organizations for local law enforcement. In a stunning turn of events, the Varangian Guard was hired by LeGuin Stronghold to handle station security for the immediate future.

Several members have signed up for this, moving from their standard Freebooter employment on Caen Stronghold or the Sirius A system, to this Independent station. We spoke with one of the Varangian Guard on LeGuin, Milo Redhand, and he had this to say.

“Firstly it’s easy work. The station is basically a “ghost-town”, nothing going on except for some vandals and addicts. We ‘Booters have all seen worse where we’re from, it’s kinda like a holiday, just a really boring one. Hey, at least the drinks are good!”

We hear an increased number of Independent stations are discussing similar terms with the main private security companies. The industry has been buzzing with excitement at this latest opportunity. A stable and relatively safe gig is something very rare for us bodyguards!

Boson’s verdict: Keep your eyes open to any job openings!

Finally, we can announce the winner of our Bodyguard of the Cycle award! It goes to Marge Carter, ex-Consortium military and now a member of the prestigious Athena group. Besides having 3 full cycles without a client fatality, she’s one of the few contractors in all the systems with a five-star customer approval rating. You can find Marge plying her trade on the Jump Gate in the Ross 154 system. She deserves a round for her truly amazing work. Here’s an exclusive quote from the winner:

“I suppose it’s nice to be appreciated, but I don’t do this for awards or for approval. I like what I do and I’m damn good at it! Protecting the weak and cowardly is a responsibility that I don’t take lightly. Secret to my success? Nothing fancy, quite simple really, I go by three rules; Be wary, shoot first, protect the client. If you stick to those, you should be fine.”

Congratulations to the big winner! As her prize, we will send Marge on a fully paid vacation to the Spirit of Tianjin, per her request. As a Patron, she can enjoy the notorious ‘Carnival’ for all her heart’s desires.

In a dangerous world with a deadly occupation, you may need some assistance continuing your existence. We at Anima Foundation can promise that this day won’t be your last day! Try one of our Premium clones wherever you find our services.
Anima Foundation – “Ensuring your Future, Now.”

Boson & Draco’s final tip: Folks, stay safe, stay vigilant, and – most important of all – subscribe to the Bodyguard’s Bulletin!