Our dream for Tau Station is to create a world you can explore and escape into, the way that we escaped into books as children. A world that you can picture yourself living in. But with more than two hundred stations to visit and explore, NPCs to talk to, missions to take, careers, combat, trading, politics, and more, how can we translate that onto the screen while also making it accessible to all players? It’s a challenge, but we have a team of very talented people working on it. By following web standards and design best practices, they’re building a user interface (UI) that is both good for gameplay and supports our overall vision for the game.

Our UI:
• Ties all the elements of the game together
• Is easy to use
• Provides you with information when and where you need it
• Contributes to the immersive atmosphere of the game
• Is accessible to all players
• Follows the principle of designing for mobile first

Welcome to the first edition of Tau Station: Status Report. We’ll be posting an update every month to share what we’ve recently accomplished and what we’ll be working on next. We appreciate everyone who supports our game and want to be transparent with you about how the development is going. Also, it can’t be denied that knowing we’ll be going public with our progress every few weeks is a great motivator! This is our first post of this kind and it’s going to be a long one, so grab a beverage of your choice, find someplace comfortable to sit, and come along for the ride.

The importance of a good logo really can’t be understated. It’s often the first part of the game you see and it gives a visual impression of what you’ll experience. A good logo can attract you to a game and a bad one can turn you off to it completely. So it’s no surprise that we put a lot of work into designing one for Tau Station. We wanted to get it right, and it was worth the effort because we came up with a logo that we love.

The inventor of the web, Sir Tim Berners-Lee, famously said:

“The power of the Web is in its universality. Access by everyone regardless of disability is an essential aspect.”

We share Sir Berners-Lee’s vision. As we design Tau Station, we’re striving to meet the highest principles of video game accessibility. This means being sure we meet level AA of the W3C’s Web Content Accessibility Guidelines, and the game is playable across a wide range of devices and browsers. Our goal is to open the Tau Station universe to disabled gamers, and make it possible for those facing new physical challenges to enjoy video games again.  The passionate developers on our team share their thoughts on game accessibility below. 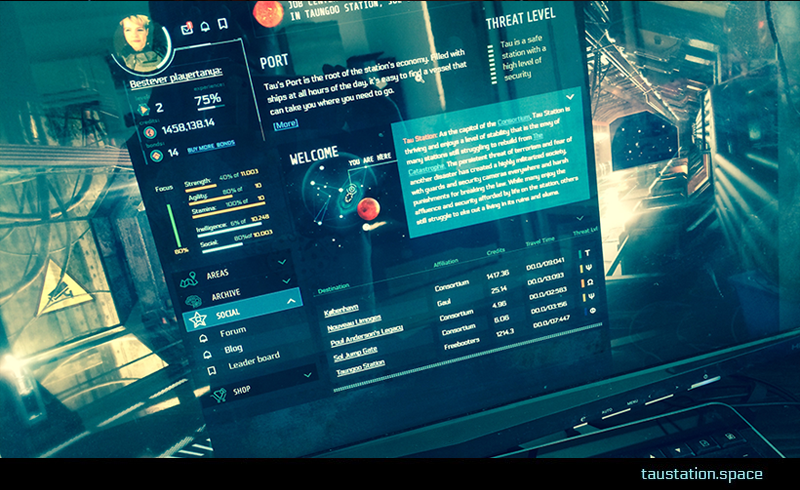 Words are awesome. Given a dictionary and enough time, a good writer can produce stories of limitless scope and grandeur. Dune, Foundation, The Laundry Files, John Carter duking it out with the baddies of Barsoom – we owe all these stories and more to authors spending massive amounts of time stringing words together. Tau Station is a text-based game, so believe me when I say that we like words. But we also like the richness that good art brings to a game, and the way it can give players some insight into the world and plot before they’ve begun to play or even read a single word.

I’m doing heater runs in Taungoo when a contact I haven’t heard from in years asks me to quietly deliver a package to Nouveau Limoges, another station in the Sol System. The money’s good so I head down to the port, hop in Amethyst, and launch. Amethyst‘s an older ship and she’s higher maintenance than I’d like, but she keeps flying.

A little over 7 segments later (just over 1.5 hours, old Earth time) I arrive at Nouveau Limoges and that’s when the trouble kicks in. I’m a Consortium citizen, but Nouveau Limoges is a Gaule station and I forgot to renew my visa. Immigration computers notice my status and Amethyst‘s nav system is overridden to auto-deport me. Meanwhile, I was supposed to deliver the package in my hold within 8 segments and now it’s starting to change shape. I think I’ve been set up.