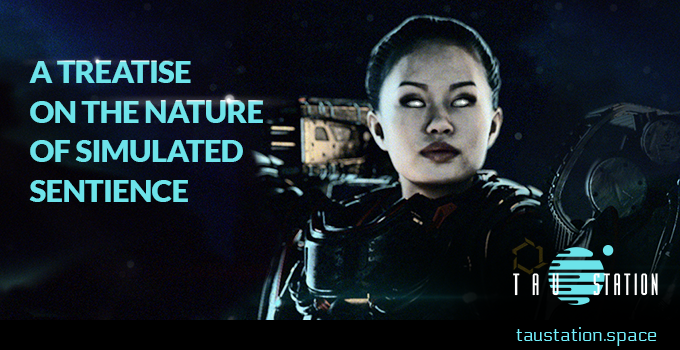 Humanity finds itself in a position unique in its history. We, for the first time in our civilization’s life span, possess technology at our disposal that we no longer know how to craft. The knowledge of a number of technologies and systems that we utilize, the secrets behind their inner workings and prototype designs have been lost after the events of the Catastrophe.

Part of Benevolent Dynamics’ raison d’être, as it were, is the rediscovery and reclamation of this knowledge towards its utility in our everyday lives. The end goal, of course, being the hopeful rekindling of humanity’s extropic flame lighting our way once more throughout the galaxy.

One of the more interesting technological mysteries currently under our scrutiny is that of simulated sentience. Androids, gynoids, and the gender neutral xynoids, while not entirely uncommon in and around the various stations we currently inhabit, function in certain ways that are, as of yet, still not fully grasped. As such, the ‘population’ of these more complex systems are finite. We have the knowledge to activate them, to (more often than not, with their own help) repair certain superficial issues and the like, but to fully program the software behind their behavior is something we are still striving to understand.

To date, we have gleaned certain parameters that lie at the surface of an android, gynoid, or xynoid’s operational matrix. These rules correlate with certain ancient texts that originated from Earth and govern the behavior of these systems.

While an almost infinite matrix of processes surely govern many behavioral patterns of an android, gynoid, or xynoid’s ‘character’, the above four serve as the prime directives of these systems. It is therefore inconceivable for a given unit to be dangerous to a human in any way. Whilst many do experience a certain unease when faced with individuals of programmatic intelligence, it is merely an emotional response and not one born of logic or fact.

While both androids gynoids and xynoids, and robots display and utilize an extent of programmatic cognizance, they do so in vastly different capacities. Both are able to function with a certain amount of autonomy within a given set of parameters. However, the former display more nuance and depth in both interaction and problem solving.

It is important to note that however much an android, gynoid, or xynoid may ‘seem’ to possess a rudimentary personality, this is not the case. Software provides rules and guidance that govern the way the unit will respond to different circumstances. A certain amount of ‘learning’ or complex problem-solving and adaptation have also been observed in them and, to a much lesser extent, robots. Again, however, this is no more than a very well-written program system.

There may also be something to the visual distinctions between the two types of system that may have had some bearing in their initial design. Our predecessors from the Before, for some reason that only they knew, chose to make androids, gynoids, and xynoids resemble humans to a certain extent. They can be identified by their all-white glowing eyes and artificial skin pigmentation. The ‘flesh’ of a unit is comprised of a quasi-organic polymer plastic that houses the various fluids required for both internal lubrication as well as cooling.

In contrast to this, robots do not deviate from their mechanical origin in appearance. They do, however, have a larger diversity in look and function. From the small, cylindrical units that keep stations clean to the bipedal service bots that do everything from tend bar to data entry in certain embassies, all robots look like machines.

Like androids, gynoids, or xynoids, robots have speech functionality in order to best communicate and facilitate the needs of those around them. Unlike the former group however, a robot’s speech pattern is more finite and less nuanced, more a series of permutations in as far as programmed responses.

While perhaps not the most imperative aspects of the Before that we seek to reclaim, androids gynoids and xynoids, and robots do, perhaps, represent a facet that is most ingrained in our current society. This in itself presents a fascinating conundrum; walking among us, advising us and performing all manner of our tasks are machines that, technically, we do not fully understand how to craft or operate. While the rules that govern them ensure that they can never ever cause us harm, it is nevertheless an interesting reflection upon our post-catastrophe culture.