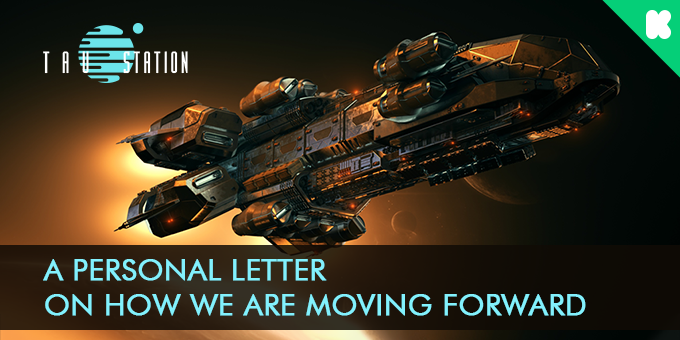 All hands: incoming message from the Admiral.

Tomorrow will be the last day of our Kickstarter. It’s reasonable to say that it was not an overwhelmingly financial success.

That said, I have to confess that I am rather happy with the result and quite optimistic!

Before we started the Kickstarter, many warned that we were going to fail. That a Kickstarter was not the right place for a free-to-play game, our type of game. Many warned we were not doing it right, many warned that this and that and furthermore… (Not to mention that we accidentally launched early, Kickstarter could really benefit from an, “are you sure?” tooltip).

And you know what? I shrugged it off. I wanted fireworks, I wanted excitement, I wanted to see by myself and not just follow blind warnings.

And I got all of the above, and the experience was beautiful!

During this Kickstarter campaign the team was there, working at 100% capacity and beyond! They provided content, often last minute and well into the night, in addition to day-to-day work. They were amazing and I want to take this opportunity to say thank you to each one of them for devoting so much of themselves to this dream, to this universe.

And, you were there too. Old and new friends alike! This too, was an amazing feeling, watching our unfinished project being discovered. Not to say how wonderful it was to watch you choosing to support us, going through our missions, our gameplay, providing feedback, and more importantly staying with us throughout!

And, to me, all of this makes the whole adventure that much more beautiful. It makes this 17 758 euros beautiful.

Some will say that we failed. We appreciate them as well. They are a guiding voice, the computer informing us when the vessel has drifted off course or has suffered a hull breach.

And that is very much what we are doing, and going to keep doing. Before the end of the month we are going to release a new system with new stations and missions for you to discover. Soon after that we are going to push interactive combat live as well.

It’s such an imperfect and exciting time. We keep moving, we keep creating. We stay together and revel in the chaos and creativity!

But that’s not all.

I also wanted to deliver what we initially promised through Kickstarter. Therefore, we will move all the rewards to Tau Station’s shop tomorrow once the Kickstarter campaign has drawn to a close.

All of them are available to you, the same way that they were available through Kickstarter, currently with the same quantities and same conditions.

If you move forward with us and decide to keep supporting this grand adventure, you can expect the following:

And now let’s move forward! Let’s create and continue to make Tau Station as beautiful on the outside as it is on the inside. The engines are primed, the course is set. We are polishing the hull, upgrading the plasma coils, training and retraining the crew! The journey continues… 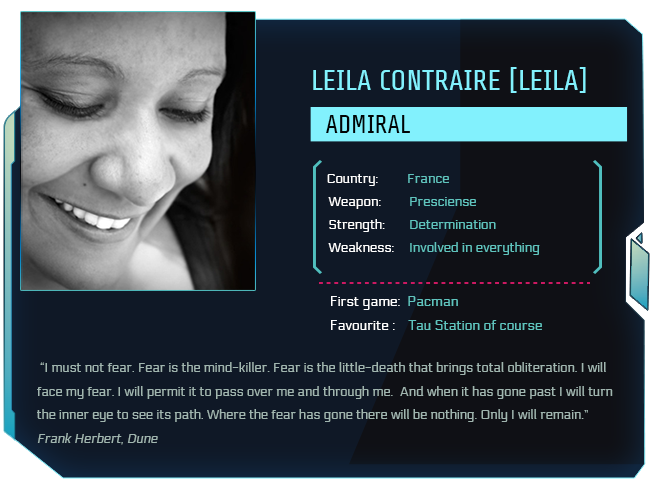 Leila Contraire is known as Leila in the game, she’s the admiral of our space project. She is from France, her weapon is prescience, her strength is determination while her weakness is being involved in everything. Pac Man was the first game she ever played and her favorite game is…Tau Station, of course!

I must not fear. Fear is the mind-killer. Fear is the little-death that brings total obliteration. I will face my fear. I will permit it to pass over me and through me. And when it has gone past I will turn the inner eye to see its path. Where the fear has gone there will be nothing. Only I will remain.” – Frank Herbert, Dune